Simon and Lesie discuss their love of Star Wars. 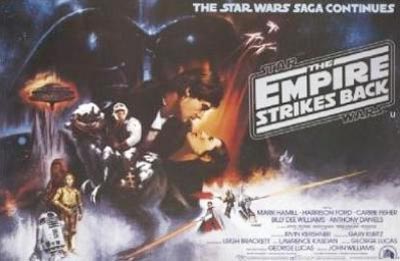 Lesie: Hey, Simon. Have you heard that they're making the third episode of the new Star Wars series?

Simon: Yeah, yeah, I heard about that.

Simon: Well, the old Star Wars that they made 20 years ago, I really like.

Lesie: Me, too. Me, too.What's your favorite episode of the old series?

Simon: Of course, that would have to be number two, The Empire Strikes Back.

Lesie: Really, mine is the original Star Wars.

Simon: Oh, really! Why do you like it so much? Why is it the best?

Lesie: I think it's the best because the characters are really, really different. In the second and third one they're kind of, they begin to mellow, but in the first one, they're really different.

Simon: Oh, you mean that each character is distinct from the other characters.

Simon: Yeah, I like the second one better because it's a little bit darker and cooler and the bad guy, Darth Vader, of course one of the most famous bad guys in movie history, plays a bigger part and you know there's the drama and plus the, you know, the fighting, and the space scenes are all a little bit better and cooler.

Lesie: I see. Well, my favorite character is Princess Leia. Do you know why?

Lesie: Well, because she was the first positive strong female character I saw in the movies. She was take charge, told everybody what to do.

Simon: Well, she was popular with both girls and boys.

Lesie: Right! Hey, did you have any Star Wars toys when you were a kid?

Simon: Yeah, of course, I had the Luke Skywalker action figure.

Simon: How about you?

Lesie: Ah, I can't remember. I don't remember if I have any, if I had any toys but I had the soundtrack to the movie.

Simon: So can you sing, can you hymn it a little bit of the soundtrack right now?

Lesie: No, but I can tell you most of the dialogue from the first movie.

Simon:So that you can say that you are a diehard Star Wars fan?

Lesie: I am a diehard Star Wars fan.

Simon:Yeah, when I was young, me too.

Have you heard that they're making the third episode of the new Star Wars series?


A television show is shown in 'episodes.'  Usually an episode is between 30 minutes and an hour.  Notice the following:

In the second and third episodes, the characters kind of begin to mellow.


When you 'mellow,' you begin to calm down and relax.  Notice the following:

Oh, you mean that each character is distinct from the other characters.


'Distinct' is another way of saying different. Notice the following:

I like the second one better because the fighting and the space scenes are all a bit better and cooler.


'Space' is the area that is in the sky and far away from earth.  A 'scene' is a place where an action or even occurs.  So a 'space scene' is an even that occurs in space. Notice the following:

When I was a kid, I had a Luke Skywalker action figure.


An 'action figure' is a toy that is made to look like a character from a movie, book or show.  They are usually kind of small and can move like real people.  Notice the following:

So can you say that you are a diehard Star Wars fan?


A 'diehard fan' is a person who is extremely enthusiastic about something or someone, usually to the point of being a little ridiculous. Notice the following:

468 Types of Travel
Simon discusses the pros and cons of travel.
﻿
INT 4
Simon

466 Best Movie Ever
Simon and Lesie discuss their love of Star Wars.