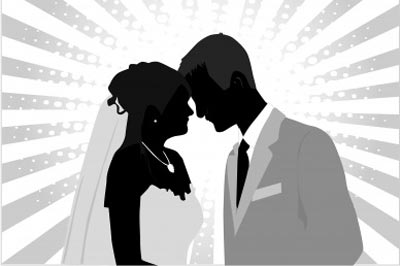 Todd: So, Mark, um, you mentioned that your wife is Japanese.

Todd: Ok, and how long have you been married?

Mark: We finally got married in April of 1998 but it took us a while to get to that stage.

Todd: Ok, well,what’s it like being in an international marriage?

Todd: You said that your wife speaks to you in Japanese and you speak to her in English?

Mark: No it’s fifty-fifty really. It really depends on what we’re talking about: if we’re watching an English movie or something on TV in English we’ll speak in English; if we’re reading the Japanese newspaper and we find something interesting we will probably speak in Japanese.

Todd: Ok, well, actually, how did you meet?

Mark: Through my room mate in Japan, how many years ago now, probably about 15 years ago…

Todd: A while back

Mark: …introduced us. Yeah, it’s been a long time.

Todd: That’s cool. Is there anything that’s hard about having an international marriage?

Mark: I suppose it means that you’re always away from one person’s family. I suppose that’s the hardest thing. I’m in Japan now so I’m a long way from my family; when we lived in New Zealand before, my wife was a long way from her family.

Todd: That’s tough, that is tough. So how long did you live together in New Zealand?

Mark: We were there for about 4 years,…I think. Yeah, yeah, approximately 4 years in New Zealand.

Todd: Now, have you lived in any other countries together?

Mark: No, no, not together, it’s either been Japan or New Zealand.


Todd: Do you have any plans as to which country you’re going to settle in?

Mark: Now that sounds very permament to me!

Todd: So you never know?

Todd: Alright, thanks a lot, Mark.