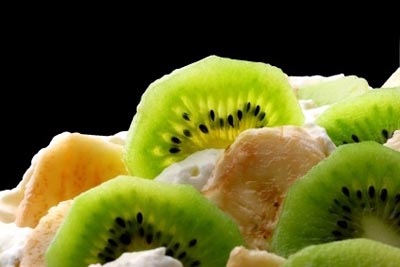 Todd: So, Mark, when people think of Americans they often think of the hot dog and when they think of Japan they think of sushi. What are the foods that people associate with New Zealand?

Mark: According to a lot of the Japanese students that I know who have gone to study in New Zealand or have a home stay programme over there, they normally come back speaking about 3New Zealand foods. The first one is probably fish and chips, which is a traditional or unofficial traditional Friday night meal. At the end of a long week mum and dad will say, “Lets go and get some ‘greezies’”: deep fried battered fish, potato fritters or hot dogs and fried chips. They used to be wrapped in newspaper but now for health reasons you’ve got to have plain white paper.

Mark: Yeah, but the fish and chips dinner on Friday night is a bit of a tradition.

Todd: Oh, ok what else besides fish and chips?

Mark: The other one would be something called a pavlova which is similar to a large meringue cake, very rich, very very sweet, made with egg white and lots of sugar with lots of whipped cream and fresh fruit on top. Kiwis and Australians often argue over who invented it but I’m sure kiwis did!

Todd: Pavlova, uh?Is this like a snack you eat in the afternoon?

Mark: No, it’s a dessert, it’s the size of a cake. It would be a dessert cake.

Todd: Is this something people make themselves or buy in the store?

Mark: The best ones I think are home made. The third food is vegemite, which is a breakfast spread, a yeast based breakfast spread. Lots of non-New Zealanders who don’t know it think that it looks like chocolate spread, and then they put in on their toast or bread in the morning, but it actually has a very unique taste and it’s nothing at all like chocolate!

Todd: So is it bitter? Is it sweet? Is it sour?

Mark: It’s got a very yeasty flavour but its quite hard to describe, but its another one of those New Zealand traditions.

Todd: You say its made from yeast so what are the main ingredients?

Mark: It’s a yeast based extract so its very healthy for you: lots of minerals, and all kiwi kids should grow up on it.

Todd: Ok, sounds interesting – I’ll have to give it a try.

What are the foods that people associate with New Zealand?

To 'associate' one thing with another is to make a mental or emotional connection between the two things.  Maybe the smell of coconut lotion makes you think of a vacation at the beach. Notice the following:

According to a lot of the Japanese students that I know who have gone to study in New Zealand or have a home stay programme over there.

A 'home stay programme' gives young people, usually students, the opportunity to live with a family in a different country. Notice the following:

They used to be wrapped in newspaper.

When you cover object with a different material, usually cloth or paper, to protect it or hide it, you are 'wrapping' it.  We wrap fragile items in paper so they don't break.  Notice the following:

Is this like a snack you eat in the afternoon?

A 'snack' is little bit of food you eat if you are hungry between the regular meals of breakfast, lunch and dinner. Notice the following:

It’s a yeast based extract so its very healthy for you.

An 'extract' is solid or liquid that comes from plants that we use to give flavor to food when we are cooking. It has a strong smell or taste because it's a concentrated form of the plant.  Notice the following: