Ruth talks about the people in her family. 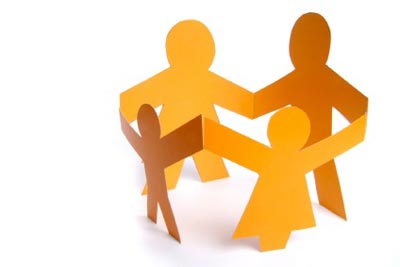 Akane: So who is the funniest person in your family?

Akane: Oh, good. Now who is the most serious person in your family?

Ruth: Serious. Do you know, actually, I don't think anybody in my family is serious.

Ruth: I don't think we have any very serious members.

Akane: Do you think that's a good thing or a bad thing?

Akane: Right! Now who is the hardest worker?

Ruth: No, I don't think that's true actually. Well, both of my parents work very hard, and they both have very different jobs, but they both work very hard and always have done.

Akane: Well, parents do tend to be hardworking.

Akane: And who is the most generous person in your whole family?

Ruth: My brother is really generous and he makes me feel bad because he's so generous in buying me things and giving me things, and I would say my brother.

Akane: Really, what's the last thing he bought you.

Ruth: Ah, that's a good question. He bought me some clothes actually before I came to Japan.

Akane: And who do you talk with the most in your family?

Ruth: All of them really, but I suppose deep down I maybe talk to my mom the most. I tell her most things.

Akane: Really! What kind of things do you tell her?

Ruth: Just everything that's going rough in my life, really ,because she's a really good friend to me so, I'm just very open with her, and she's open with me.

Akane: That's excellent. Who do you resemble the most in your family?

Akane: Do you have a picture of him?

Akane: I'll look forward to that.

She's got a really good sense of humor, and she plays tricks on people.

If your friend has a good appreciation of humor or feeling of what is funny, you can say she has a 'good sense of humor.' Notice the following:

Who is the most generous person in your whole family?

A 'generous' person is a nice person who gives to other people without expecting anything in return.  She enjoys helping other people.  Notice the following:

I suppose deep down I maybe talk to my mom the most.

Something you know 'deep down,' is a feeling or emotion that you know is deep inside yourself, but don't always act out. Notice the following:

Just everything that's going off in my life.

Events that are 'going off' are happening or occurring now.  Notice the following:

Who do you resemble the most in your family?

If two things look alike or have similar appearance, they 'resemble' each other. There is a resemblance (noun) between them. Notice the following:

sense of humor • generous • deep down
going off • resembles