Ruth talks about why she likes raisins. 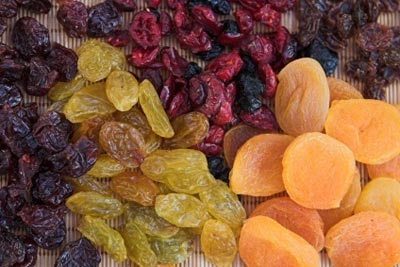 Todd: Good. Now Ruth, I was noticing that you are eating raisins.

Todd: What is it with the raisins? You always have raisins!

Ruth: I really like raisins. They’re so nice. They’re so practical because you can take them anywhere. It’s not like if you take other fruits with you: they squash and they bruise but raisins are so handy and they come in a little packet and you can always have fruit with you.

Todd: That’s a pretty good point there actually but still, I mean, all the time? I see you with raisins every day!

Ruth: I eat raisins every day. I really like them.

Todd: Don’t you get sick of them? I mean eating them every day?

Ruth: Actually I prefer grapes. Grapes are probably my favourite fruit but they’re not practical. You can’t carry them around with you and they’re heavier and they’re more expensive as well. Raisins are cheap.

Ruth: Yeah that’s true. I don’t know why that is. Do you think that’s because its slightly acidic maybe?

Todd: Yeah, grapes are great. Actually where I’m from in California it’s a big producer of raisins.

Ruth: Oh yeah that’s right and you can get raisins in little red boxes can’t you?

Todd: And I love raisins in cookies and raisin bread.

Ruth: I don’t think I’ve ever had raisin bread.

Todd: What? You’re like a big raisin fan. And you’ve never had raisin bread?

Ruth: I don’t think so. Is it like a teacake?

Todd: No, it’s just like a sweet bread with raisins in the middle.

Ruth: No, I’ve never had that.

Todd: You are deprived!

Todd: Well I’ll find some raisin bread and I’ll give it to you.

It’s not like if you take other fruits with you: they squash and they bruise.

A bruise is a bad area on a fruit or vegetable that is a result of being dropped or hit. It is usually softer or a different color than the fruit normally is.  Notice the following:

Raisins are so handy and they come in a little packet and you can always have fruit with you.

Something handy is convenient or useful and usually makes life easier.  It is handy to have an umbrella if it starts to rain.  Notice the following:

Don’t you get sick of them? I mean eating them every day?

When I eat grapes, my mouth gets a sensation.

A sensation is a physical or emotional feeling that is a reaction to something in the world. You can experience both good and bad sensations. Notice the following:

To 'be deprived of' is to not have something that you want or need. This can be both physical items or experiences.  Notice the following: