Carla talks about interesting creatures at her home in Africa. 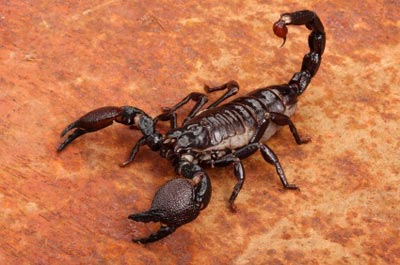 Todd: So Carla, you lived in Africa, so you must have some cool animal stories.

Carla: Do you want my cockroach story, or my monkey story, or my chameleon story? I know! I have a snake story.

Carla: We had a snake that lived in the bookcase. And you can never tell where he was except that that book was, except that that book was sticking out of the bookcase so you always knew where he was. And if you knocked on the book, you could pull it out and he would just lie there. But if you pulled the book out without knocking first, he would be frightened so he'd rear his head up and hiss at you and stick his tongue out and wiggle it around. He was a python, a baby python. Maybe two metres long.

Todd: And you just let him live in the house? You didn't make the snake leave?

Carla: When he was growing a little bit bigger, and he started leaving his skin around, we got fed up with that. I said to him “I'm fed up of clearing your skins away so you're out fella”.

Todd: Wow, well who made the snake leave. How did you get him out of the house?

Carla: Oh we just put him outside in the garden.

Todd: Did you ever see him again?

Todd: No no no, tell. Ya what's the scorpion story?

Carla: Well, the scorpions were about… what ten, fifteen centimetres long. Great big black things. And a friend of mine had… We didn't have any running water in that village either. And so we had a man who would come in every morning with a big head load of water. A big huge bucket on his head carrying water, and he'd tip it into our huge barrel in the back garden. And then we would have to move it out bucket full by bucket full. Anyway, so our bathroom was always dry. There was never any water, the taps didn't work. And we kept our bath sponge on the edge of the bath. And one day, I went to take a shower to have a bath, and I picked up the sponge and I put it against myself and I got this terrible pain. Because there had been a scorpion hiding underneath the sponge. And it stung me. But luckily it stung me in a place where it didn't hurt so much. On my stomach.

Carla: If you get it on your foot or you hand where you've got lots of nerves, it's really excruciating.

That book was sticking out of the bookcase so you always knew where he was.

Something "sticks out" if it is not in the correct place, such as a little too far forward, backward, to the right or to the left, as in the book example.  Notice the following:

He would be frightened so he'd rear his head up and hiss at you.

To "rear up" is to lift up a part of the body, usually in an angry or surprised manner.  We frequently use this phrase to refer to horse when the are angry and push up on their back legs.  Notice the following:

We didn't have any running water in that village.

"Running water" is water that comes out of the faucet in a house and is controlled so it can be used by people.  Notice the following:

Then we would have to move it out bucketful by bucketful.

A "bucketful" is full bucket of something, for example sand or water.  To move something "bucketful by bucketful" is to fill one bucket, move it to a new place, empty it and then repeat.  In this case we are talking about a bucket, but we can also use cupful or spoonful, depending on the container that we have.  Notice the following:

If you get it on your foot or your hand where you've got lots of nerves, it's really excruciating.

If something is "excruciating" it is very painful.  Notice the following: