Carla talks about the chameleon in her house. 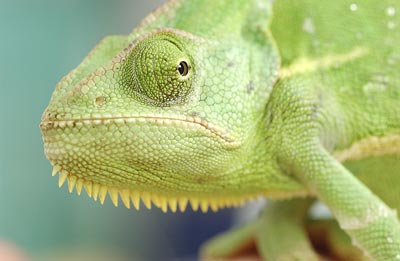 Todd: Carla, you said you have a chameleon story?

Todd: Actually first of all, just for the listeners, what is a chameleon.

Carla: I was going to tell you what that is. A chameleon is an animal that can change its' colour depending on where it is. So if you put it on a black book, for example, it'll turn very dark. If you put it in a light place, it'll go bright bright green. It could go spotty yellow and green. And the other thing that's interesting about it is that it's eyes can move in two different directions. So it's right eye can look forwards and it's left eye can look backwards. So if you stand on one side of it and wiggle your hand around, one eye will look towards the back and the other eye will look towards the front. And it also has a long long tongue so it zaps its tongue out to catch a fly. Anyway, we found this chameleon, and we took it into our house. And we had it for about, I think maybe two weeks. And we had an electrical chord, that went from our refrigerator, up the wall, into the ceiling above up to the electrical box in the roof space. And this chameleon spent two weeks crawling up the chord getting to the ceiling and dropping off. And crawling up the chord and getting to the ceiling and dropping off. But every once in a while we would, I took it into the classroom sometimes and we would kind of play with it because we liked to, it was a good biology experiment …

Carla: … to put different colours of things around it and see what colour it would turn into. Then after a while we let the poor little thing go.

Todd: So it didn't mind you picking it up and taking it?

Carla: Actually, it did mind because if you picked it up by about half way… three quarters of the way down it's back, that was safest because it can't swing its upper body around. But it would turn around and hiss at you.

Carla: So you, the first time I just dropped it cause it was scary. And the second time I realised that's about as scary as it got so. That was it.

Learn Vocabulary from the lesson
Answer the following questions about the interview.