Rachel talks about a wedding that is different than most weddings. 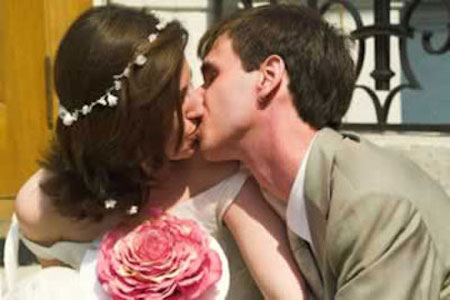 Wendi: OK, so I have never in my life been to a Wiccan wedding, and I want to know exactly what goes down?

Rachel: OK, a Wiccan wedding, unlike other weddings, it's about their religion but it's more about celebrating the love of the couple and then they just kind of bring in the forces of nature: earth, wind, fire and whatever the other one is and, yeah, basically it was really a celebration of their love, and the bridesmaids and the groomsmen stood around the couple in a circle and kind of had to send positive energy. It was a very hippie kind of love-fest wedding, and unlike traditional flowers there was leaves.

Wendi: Oh, that sounds so beautiful. On the floor kind of thing?

Rachel: On the floor, yeah, and it was in the autumn so they were all different colors.

Wendi: Was it outside or inside?

Rachel: It was inside but then the reception was outside.

Wendi: Wow, so it held in a church?

Rachel: I t was, no, it was not held in a church because there is no real church for Wiccan people. They just kind of, if anything, meet in small groups and talk about nature and things like that.

Rachel: Yeah, but it did have kind of like and archbishop for Wiccan, people come in a very brightly colored cloak

Rachel: And he was waving around a kind of staff.

Rachel: Yeah. And they actually had to jump a witches broom at the end of it.

Wendi: Ah, I've seen that before, I think in the Southern U.S. that's kind of a custom or something like that. Have you seen that custom anywhere else?

Rachel: No, just at the Wiccan wedding.

Wendi: I've heard of that jumping over the broom before. I'm not sure. I'm not sure where I've seen that before, but yeah, that's interesting. Tell me a little about what the man and woman getting married were wearing?

Rachel: Um, regular traditional outfits. It was more the man who was conducting the wedding the ceremony that had something strange on. The bride wore a regular white gown with a veil and the groom wore a tuxedo with a tie.

Rachel: All the bridesmaids had the same dress on picked out by the bride. Maybe instead though the jewelry was much more gothic style. Crosses and things like that. But yeah, everybody looked like a regular wedding except for hippie looking guy.

I have never in my life been to a Wiccan wedding.

'Wicca' is a form of witchcraft that uses practices having to do with nature to make good things happen. Notice the following:

In a Wiccan wedding, the couple just kind of bring in the forces of nature.

'Forces of nature' include earth, wind, fire and water. These are the natural powers that exist in nature. Notice the following:

The bridesmaids and the groomsmen stand around the couple to send positive energy.

'Positive energy' is like optimistic thoughts or good wishes. When you send someone positive energy, you are thinking of him and wanting him to succeed. Notice the following:

The Wiccan wedding is a very hippie kind of love-fest wedding.

A 'love-fest' would be like a party where everyone loves each other and is happy, smiling and having a good time. Notice the following:

But it also has like an archbishop for Wiccan people who come in a cloak.

An 'archbishop' is a bishop, who is an important figure in a church, that has the highest power within that particular church. Notice the following:

685 Dinner
Adrienne talks about dinner and eating out.
﻿
INT 5
Adrienne

681 The Nature Wedding
Rachel talks about a unique wedding.