Ken talks about his favorite team, cheerleaders and good teammates. 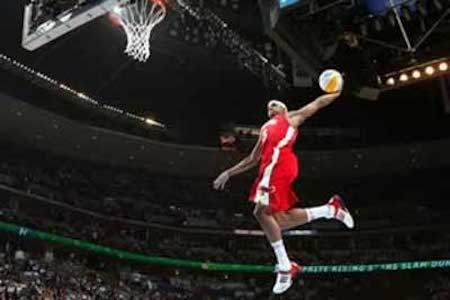 Wendi: So I wanna know who your basketball team is?

Ken: Who my basketball team is?

Ken: Oh, OK. I'm from Atlanta so my favorite team is the Hawks, unfortunately. For the past six or seven years, they have sucked it up royally and they haven't been much to cheer for but they're signs of them turning it around. They've got a nice young core. Like we have the slam dunk champion on your team. A nice free agent pick-up recently. Hopefully in a couple of years we'll make the playoffs, something to cheer for.

Wendi: Alright, in any basketball game I've ever been to, it's like, at half-time, those cheerleader girls come out and cheer. What's the relationship between basketball and cheerleading?

Ken: I don't think the players are any more motivated than they would be just because some girls are dancing around in skimpy outfits but the fans still love it.

Wendi: Fair enough.... Alright, if you think of all the teams you have ever been on, what characterizes the best type of teammate to have?

Ken: The best type of teammate to have is one who is a good leader. I like good leaders, like people who know how to win, know how to get their teammates involved in the game. They motivate you. They praise you when you do well. They'll give you constructive criticism when you're not playing as well as you could be. But ultimately they know the strengths and weaknesses of each of the players on the team and they'll make the most of it based on what they feel is best for the team.

For the past six or seven years, they have sucked it up royally.

Used like this, 'suck it up' means you do something really badly. It can be used for when someone usually plays well but is not playing badly. Notice the following:

There are signs of them turning it around because they've got a nice young core.

Here, 'core' refers to the main group of players. There are a few older players on the team, but for the most part the players are young. Notice the following:

The players aren't any more motivated just because the girls are dancing around in skimpy outfits.

A 'skimpy outfit' is one that doesn't cover much of your body. Notice the following:

They'll give you constructive criticism when you're not playing as well as you could be.

'Constructive criticism' is when someone points out something that you are doing wrong in an effort to help you improve. Notice the following:

sucked it up • core • skimpy
constructive

690 Fashion and Piercings
Rina shares with Wendi how she keeps herself looking good.
﻿
INT 5
Rina

689 Beauty Secrets
Rina talks about her legs, her eyes, and make-up.
﻿
INT 5
Ken

687 Basketball Superstars
Ken talks about the stars of the NBA and why they are good.
﻿
INT 5
Ken

686 Cool Comedians
Ken and Wendi talk about famous comedians in the U.S.