Lindsay talks about her engagement and what kind of wedding she will have. 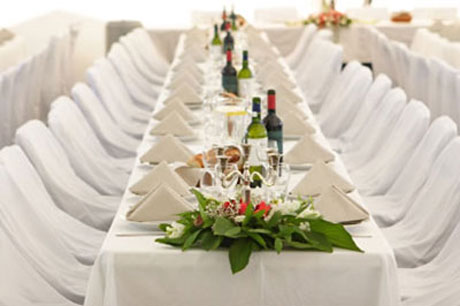 Lindsay: Hi, Chris. How are you?

Chris: Pretty good. Hey, I heard you're getting married?

Lindsay: I am. I got engaged in July and I'm getting married next September.

Chris: Wow. That's quite a long time between getting engaged and getting married.

Lindsay: It is but in America you usually have an engagement for one year.

Chris: Why is that?

Lindsay: Well, I hired the band.

Lindsay: Yes. They're a funk band.

Lindsay: They play the Beatles and Earth, Wind & Fire.

Lindsay: Maybe not together, but I've hired a band and they're great and I've also hired the florist, and I've hired the caterer so we have the food and everything sorted and I have picked the location.

Chris: Well, how long did it take you to decide all that? It seems like you've done a lot of preparation already.

Lindsay: It took me about two months to get everything done. I saw about five different bands and six different florists and I looked at about seven different places.

Chris: Did the bands actually come to your house? Kind of set up in your living room and play or what?

Lindsay: No, I would look at the video. Each band had a video, so I previewed by looking at their video, but it was important for me to have a band that was very lively and that had an MC, so someone could be in charge of the wedding to say the announcements.

Chris: And so, are you doing all the preparation or is your fiance helping out?

Lindsay: He's pretty much doing nothing so I'm doing everything, so the thing last that we really need to figure out is the guest list and then what will the ceremony be like.

Chris: OK. So I suppose he's paying for everything, right? That's his job?

Lindsay: Yeah, but I'm gonna get a lot of presents so I'm very excited.

If two people are 'engaged,' that means they have decided to get married.  Notice the following:

A 'rushed wedding' happens very quickly and we don't have enough time to plan.  Notice the following:

It's important to have an MC.

MC means Master of Ceremonies. At a wedding, an MC is the person in charge of making announcements and directing activities.  Notice the following:

The last thing that we really need to figure out is the guest list.

To 'figure out' a problem or situation means to think about it until we have a solution.  Notice the following:

in the fact that

I'm fortunate in the fact that my parents are paying.

The phrase 'in the fact that' usually follows a statement and explains why something is true. It's similar in meaning to 'because'.  Notice the following:

engaged • rushed wedding • an MC
figure out • in the fact