Diego talks with Rebecca about some Mexican food dishes she should give a try. 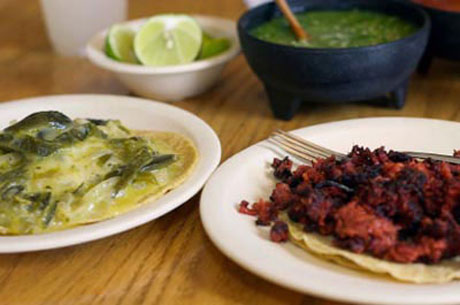 Rebecca: So, Diego, I hear that Mexico has some really great food and that you love to cook. What's your favorite food in Mexico?

Diego: My favorite food in Mexico is chiles en nogada. Chiles means pepper and this is a very traditional Mexican dish because our flag is green, white and red, so this plate, the peppers are green, and then it has a white sauce on top of it and then it has a grain sort of fruit. It's a red fruit and it's representing our flag so it's very... It's a very historical plate in Mexico. It's very famous.

Rebecca: Oh, wow. I don't think we have anything like that in Australia. It'd be hard to get something that you'd eat that's blue and red and white.

Rebecca: I don't think that would work.

Rebecca: So what about tacos? Do you eat them a lot?

Diego: Yeah, we eat them a lot. Tacos is like Mexican fast food, so there's a lot of tacos stands in Mexico, and you can have them in all sorts of ways: with cheese, with onions, with meat, with different sauces, like green sauce, hot sauce, red sauce. Yeah.

Rebecca: Do the tortillas... do they stand up or are they round ones that always fall over when you go to eat them?

Diego: They're the round ones and they're also soft so they're not corn chips.

I don't think we have anything like that in Australia.

The phrase 'anything like that' means the same thing as 'anything similar'.  Notice the following:

I don't think that would work.

We use the phrase 'that would work' to talk about a method or a plan that helps us get what we want.  Notice the following:

There's a lot of taco stands in Mexico.

'Stands' are small stalls or carts that sell things like food, newspapers and magazines, souvenirs, etc. They are often found along the street on footpaths.  Notice the following:

Do they stand up or are they round ones?

Here, 'stand up' is used in an interesting but uncommon way; it means fried to a crispy texture.  Notice the following:

The tacos in Australia are not true Mexican tacos.

Here, 'true' means real, genuine or same as the original.  Notice the following:

like that • would work • stands
stand up • not true