Johnathan talks about backpackers and compares them to tourists and travellers. 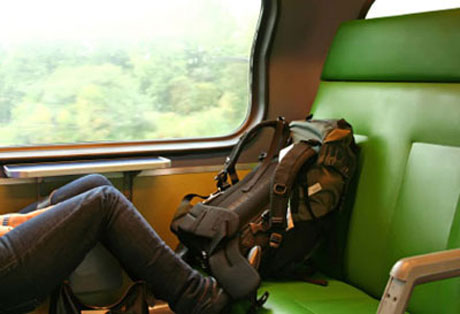 Jeff: Now the world is small and there's this type of people who are called backpackers, and you've been a backpacker, or you are a backpacker. What's a backpacker and what do you think of them?

Jonathan: I don't know if I'd go so far as to say I'm a backpacker. I actually have a bag that rolls on wheels, so I don't know if I fit that category. When I was younger, then I certainly did go around with the backpack and considered myself to be a little bit a part of that community. I wouldn't say I really would consider myself one anymore because a lot of people that I meet who consider themselves to be backpackers, they almost have a little bit of an unusual perception of what they are, and they think somehow they're different from say tourists, and I meet people who say these things, like, I'm not a tourist, I'm a traveller, or "I'm not a tourist, I'm a backpacker" in some way suggesting that they are above being a tourist in some way, but in the same hand, I'll meet people who are in some area like say Khao San Road in Bangkok, which is famous as being a backpacker street, and I meet people who stay there for two weeks and only talk to other backpackers, and they end up at the end of their holiday saying how much they love Thailand, whereas the realty was they never really went anywhere except perhaps to a little bit to a temple or something.

Jeff: So, are backpackers boys and girls, old people and young people, Indians and Canadians. Is there any, like, are all backpackers Americans for example?

Jonathan: Oh, no, actually, I meet very few Americans when I travel surprisingly. It seems that certain nationalities have a greater predisposition to travel. I meet as many Canadians as I do Americans despite the population of the United States being ten times larger than that of Canada's. I meet a lot of New Zealander's, whereas their population is comparatively tiny, but they can come from any place. I've met backpackers from all kinds of different walks of life, different age groups, different nationalities, but you do find that the majority of them are young people. Perhaps they're taking a year off before or after college. Maybe they just want to see a little bit of the world before they know they're going to be rooted in one place because perhaps from their field of study they think that their future is going to be more or less planned out and they want to get a bit of travel in before they embark on their career.

Jeff: So you have a wheely case, and you're not really a backpacker so is it OK if I call you a wheely-packer?

Jonathan: I suppose you could call me that, but I'm not sure whether other people would know that term, and if you don't mind, I'm not going to refer to myself as a wheely-packer.

Jeff: OK. Good luck on your next trip.

There's people who are called backpackers.

'Backpackers' is what we call young travelers with very little money.  They usually stay in hostels, eat street food, and have all of their things in a big backpack.  Notice the following:

I don't know if I'd go as far as to say I'm a backpacker.

We use the phrase 'I'd go as far as to say' when we give a strong opinion about something.  Notice the following:

They have an unusual perception.

When we have an 'unusual perception,' that means we think about things differently than most people.  Notice the following:

Certain nationalities have a greater predisposition to travel.

Here, a 'predisposition' talks about things we do in certain situations because of our culture or a tendency that we have.  Notice the following:

embark on their career

They want to travel before they embark on their career.

To 'embark on' something is similar in meaning to 'start'. We often use this term to talk about traveling.  Notice the following:

895 Packed
Johnathan talks about how his luggage has changed.
﻿
INT 6
Johnathan Jeff

894 Globetrotter
Johnathan talks about all the places he has lived.
﻿
INT 6
Johnathan Jeff

892 The Gift of Giving
MB explains why she loves working with Habitat for Humanity.
﻿
INT 6
Matthew | MB

891 Habitat Routine
MB talks about the daily routine on the construction site.