Santi and Todd debate whether it is better to play team sports or individual sports. 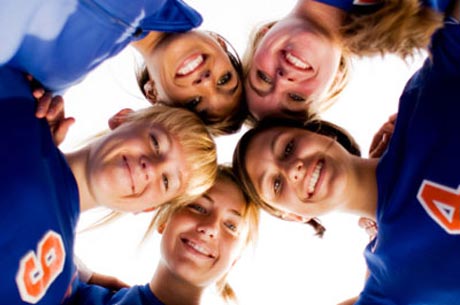 Todd: So, Santi are from Indonesia, correct?

Todd: So, I take it, you can play sports all year round cause it's really warm?

Todd: So, what kind of sports do you like to play?

Todd: That's interesting. So why? What is it about team sports you don't like?

Santi: Well, actually, when you play individually you can compete with yourself. It's much better for me.

Todd: Right, so like if you're swimming, you can increase your time.

Todd: What about yoga?

Santi: I yoga just for relaxing and just release my stress.

Todd: See, I love team sports, you know, there's something about team sports. It's so fun. Like you have camaraderie. You have friendship, you know, like you share the thrill of victory or you share, you know, when you lose, the pain of the loss. I just love that. When you do something individually, you just don't have that.

Santi:Yes, sometimes, it's true ... your opinion about that, but in my opinion, I think when I do sports, I'm very competitive, so if I get into a group, that is full of my friends, sometimes when we got lost, sometimes I feel angry.

Todd: You want to put the blame on your friends?

Santi: Sometimes I put the blame on mine, if it is my fault, but sometimes, yeah, it's just like not going so well at the end.

Todd: Right. That's true. That is true. I kind of see your point.

Santi: And I feel disappointed in them sometimes, so I'm not very good at teamwork when doing sports.

So, I take it, you can play sports all year round.

We use the phrase 'I take it'  to confirm something we are not sure about.  Note the following:

You can compete with yourself.

When we compete, we try to win or be more successfull than someone else. Note the following:

You have camaraderie with your teammates.

Cameraderie is a friendly feeling towards people we work or share an experience with.  Note the following:

The thrill of victory is a feeling of excitement that comes after winning a competition.  Note the following:

I feel disappointed in them sometimes.

Being disappointed is similar to feeling a little sad about something.  Note the following:

I take it • compete • camaraderie
thrill of victory • disappointed