Daniel talks with Vella about what he hopes to do within his lifetime. 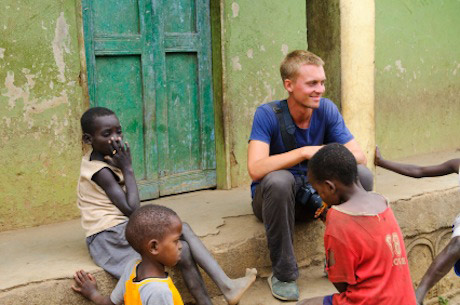 Vella: OK, Daniel, I know you're still really young but I know you must be thinking about what you're going to do in the future so my question would be what do you want to achieve in your life?

The second one is that I want to see things from a different perspective. For example, I want to climb a really, really high mountain. I don't know, Everest would be amazing but I know like you need the special training and stuff like that. Or do paragliding, I would love to have the feeling that I'm flying. That's something that really, really calls my attention to see, you know, to see something from a different perspective. It can give you not only the experience but also it can help you think in a very different way for, I don't know, many things in the future.

Vella: That is sweet. But earlier you told me like you were afraid of heights. Do you still want to do this thing?

Daniel: I am a little bit but that's a thing that I mean at least once even though you are afraid you have to do it at least once. I'm not going to do it every week, the paragliding thing, but at least once I wouldn't mind.

Vella: And do you have anything specific that you want to do in Africa?

Vella: Good. I hope you get the chance to do those three things before you die.

I want to see things from a different perspective.

Here, 'perspective' really means point of view. Daniel would like to see how the earth looks from a high point. Notice the following:

I would love to go paragliding, so I can feel like I'm flying.

'Paragliding' is a sport where you jump from a plane with a rectangular parachute that you can direct to where you want to go. Notice the following:

I definitely want to raise my children.

'Raising children' involves caring for them and teaching them from the time they are born until they are adults. Notice the following:

What you said about kids is sweet.

Here, 'sweet' means something that is sensitive or romantic. Notice the following:

There are so many myths about Africa.

A 'myth' is a commonly told story or piece of information that is not true. Notice the following:

1236 Hotel for Her
Erina's ideal hotel when traveling.