Peter talks about how South Africa has many different types of climates. 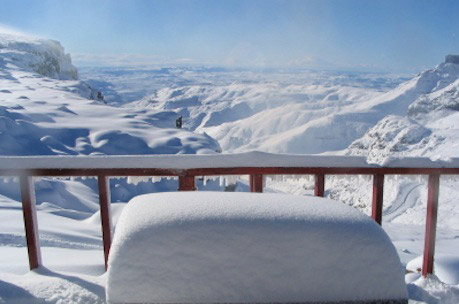 Jana: You mentioned snow. I had no idea it snows in South Africa.

Peter: Yeah, maybe I should qualify that. The central part of South Africa actually there's a range of mountains that run straight through from the northern part of South Africa right through almost to the southern tip of Africa called the Drakensberg and around these mountains and obviously on top of these mountains, you can find snow during wintertime. Actually it doesn't compare with snow in the Northern Hemisphere where you really have deep snow and things like that but it gets really cold during winter and temperatures would be far below zero for most of the time up in these mountainous areas. So, yeah, it's not enough snow to ski in but it's pretty cold.

Jana: Hmm, that's sounds interesting. I always thought South Africa is really wild and rugged and hot. Are there any such areas?

Peter: Oh, yeah, right. Actually South Africa is very diverse when it comes to areas. Like there are many different climate zones, different landscapes and actually if you travel around the country, you'd be really struck by how the vegetation can be so different within a morning's drive or an afternoon's drive. You could be in a completely different landscape and different vegetation, animals around you, different plant life. On the western side of the country, it can be really hot. It's almost got a desert type of, well it does have a desert type of landscape, very sparse vegetation, very little rainfall, not many people, not many animals, very beautiful. It's really a place I recommend people to visit because you can hear silence and it'd be quiet around you and yeah it's really beautiful but almost a bit strange, strange to be confronted by so much raw nature, I guess, if you can put it that way.

Jana: Wow, it sounds really interesting. What about, are there any tropical areas?

Peter: Hmm. I think on the eastern side of the country, close to the seaside, it's really hot and tropical most of the year. Winter it's a bit cooler but especially the north eastern parts of the country lush tropical vegetation, wonderful fruit of course, but really, really hot. Temperatures of forty five, forty degrees Celsius every day and ninety per cent humidity. Yeah, like really, really hot.

I always though South Africa was really wild, rugged and hot.

'Rugged' landscape is rough, rocky, hilly or full of mountains. Notice the following:

You'd be really struck by how the vegetation can be so different within a morning's drive.

If you are 'struck by' something, it is really noticeable and it surprises you, because it isn't something you expected. Notice the following:

It has a desert type of landscape with very sparse vegetation.

If vegetation is 'sparse,' it means there are very few plants and trees on the landscape. It is not covered by plants. Notice the following:

It's almost a bit strange to be confronted by so much raw nature.

'Raw nature' has not been touched or contaminated by humans. Notice the following:

Especially in the north-eastern part of the country, there is lush tropical vegetation.

'Lush' is the opposite of sparse. Lush vegetation is extremely thick, almost to the point where you can't walk through it. Notice the following: