Todd shares with Julia how he labels different types of students based on motivation. 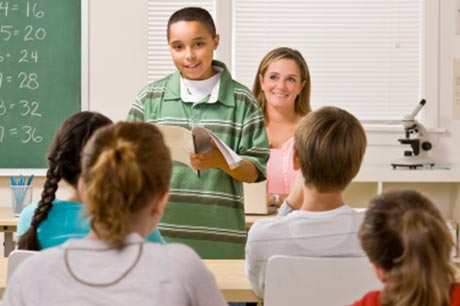 Todd: So Julia, you are a teacher.

Todd: So I'm going to run a theory by you.

Todd. So we were talking about learner types earlier and I actually think I have my own little diagram for motivational types.

Julia: Motivation types, okay, that's interesting because I need a handle on motivation.

Todd: A pupil, a participant, or a prisoner.

Julia: A prisoner, a player, a pupil, a participant or a prisoner, okay.

Todd: Okay. So a player is a student who loves a subject matter, they study it on their own, even if there wasn't class they would still study it.

Julia: Okay. Like a natural in a subject maybe?

Julia: So for the fun of it?

Julia: Someone who does it just for the sheer enjoyment?

Todd: Right. They just want to do it for the enjoyment and for the end result, like they do it and they don't need really someone telling them how good they are. Now, on the flipside you have a pupil. And a pupil would be somebody who loves class, they're a teacher's pet.

Julie: Yeah, a swat is someone who studies hard.

Julia: And gets pleasure from studying and the teacher knowing that they've studied and a swat.

Todd: Exactly. A swat, there you go, a new word for me. Not a P, but yeah. They want to sit in the front row, they want to get good grades, they want to stand out. But maybe they actually don't love the subject matter that much, they want to do that at every class.

Julia: They like being good at it regardless of what it is.

Todd: Exactly. Exactly. So those are usually the two best students you have, right. You're going to have players who love the subject and pupils who love being a good student.

Todd: And swats. And then in the system there's two more. So there's also participants. Now, a participant, they love class but they don't love in the way that a pupil loves class. A participant just loves being with their friends. They love the social aspect of class. They love seeing people they know. they love talking. They love being in a group. And it really doesn't matter what the subject is.

Todd: You know what I mean?

Todd: Like I think in college I was often a participant, like I would take a class because my friends took the class. So yeah, that's basically, that's a participant.

Julia: Okay, class is time to hang out with your friends.

Julia: Do you think they even know what subject it is that they're...

Todd: Yeah, maybe they don't even care, and exactly, you could change the subject on them, like you know, hey, we're going to do German and they would be like, "Hey, that's cool, as long as we're still together."

Julia: Well that's nice. And the fourth one?

Todd: Yeah, the last one is the sad one, the prisoner.

Julia: The fourth, like the prisoner, that sounds a little bit scary.

Julia: So there's like a mandatory subject that they don't really want to do?

Todd: Exactly. If they had the choice to opt out, they would opt out in a heartbeat. If you said, "Hey, you know what, if you want you do not have to take this class, you do not have to show up every day, everything's fine, it's cool." They wouldn't show up. So basically they're a prisoner, you know. And a prisoner doesn't actually mean that they're a bad student. They could actually be an A student, and it doesn't mean that they have a bad attitude, they could be very polite, but they just ... they really don't want to take that subject, they're stuck doing it and there's just no getting out of it.

I'm going to run a theory by you.

To run something by you means to tell you something and ask your opinion about it. Notice the following:

I need a handle on motivation.

A handle on means control. Notice the following:

on the flip side

Now, on the flipside you have a pupil.

On the flipside means on the other hand, or from another point of view. Notice the following:

They want to stand out.

To stand out is to be noticed easily. Notice the following:

If they had the choice to opt out, they would opt out.

To opt out is to choose not to do something. Notice the following:

they would opt out in a heartbeat.

In a heartbeat means right away or immediately. Notice the following:

there's just no getting out of it.

To get out of something means you don't have to do it. Notice the following:

run • handle on • flip side
stand out • heartbeat

1292 Life in Another Land
Chris talks about residing in Spain.
﻿
INT 5
Chris Adelina

1291 Life's Ups and Downs
Adelina talks about some of life's lessons.