Abidemi talks about her first memories of Canada when she moved there from Nigeria. 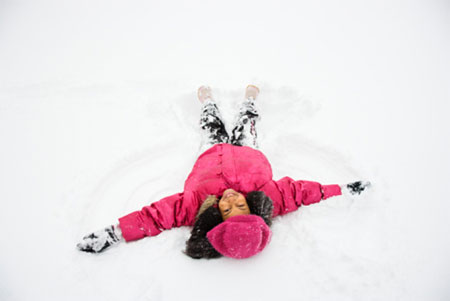 Jeremy: So Abidemi, you were born in Nigeria, but you moved to Canada and did most of your schooling in Canada.

Jeremy: Can you tell me a little bit about what the transition was like coming from Nigeria to Canada and doing a Canadian education system?

Abidemi: Sure. For me, it was an interesting experience. Both great and at the same time—hmm, I don’t want to say traumatic, but very different in terms of lifestyle. Since I was very young, I’d loved traveling. I wanted to travel. So when my family decided to make the move to Canada, I was really excited. But I have to say, I wasn’t really prepared. I had no idea where is Canada, America, England—they’re all the same to me at that age.

So when we moved and my dad had initially made the move. He went ahead of us. He got a job. He found a place for us to live. And then, I arrived with my mom and my other sisters. There were five girls and we arrived at the airport. And my first memory is looking out, mid-December in Montreal—we arrived at Montreal airport—, looking out, and seeing this white thing covering the ground and thinking, “What is that? Why is it so white?” And I remember saying to my dad as he drove up to drive us home, “Let’s play in that. I want to play in that. What is that?” So that was my first memory of Canada of the snow.

And it was fun. It was great arriving in December but at the same time, it was very cold. Personally, I’m not somebody that likes the cold too much, but having the warmth of my family in the midst of that cold made it worth it. It was awesome.

And then at school, making the transition was a little harder. At that time, the school we went to, there were not a lot of minorities. So, I think some of the teachers and some of the students weren’t sure how to get accustomed to us, and we weren’t sure what to expect either. But everyone tried their best and we flourished. And I went on to high school and then to university. And one of the things was having my teachers—like we were talking about before, recognized the potential in me and my sisters and really encouraging us, and being with my classmates and making friends and having fun with them .

And during that time, it was the late ‘90s, and there were a lot of transitions going on in other parts of the world. So people from different countries, like I remember we had a lot of people from Bosnia because of the war coming to my high school, and from other parts of the world, from Asia, so it was a really multicultural school—high school that I went to. So learning about other cultures through my friends, too, made it really worth it.

So I’m certainly glad that my family made the move. It’s opened up amazing opportunities for me as well. And being able to come now to Japan and teach English, that was because of that. So yeah, although it was hard in ways that I hadn’t imagined, but it was so worth it. And I’be grown and I’be had so many awesome experiences that yeah, I’m really thankful for it.

It was not traumatic, but very different.

Something traumatic is emotionally upsetting. Notice the following:

My dad had initially made the move.

Initially means at first, and shows that a first event was followed by another event. Notice the following:

at the same time

December was fun, but at the same time, it was very cold.

At the same time shows contrast. It is similar in meaning to nevertheless. Notice the following:

in the midst of

Having my family in the midst of that made it worth it.

In the midst of means in the middle of. Notice the following:

There were not a lot of minorities.

The minority consists of less than 50% of a group. Notice the following:

Everyone tried their best and we flourished.

To flourish means to do really well. Notice the following:

#1320 Being Different
Thinking differently from others.
INT 4
Alejandro