Paul talks about an accident he had that ruined a special day and hindered him in the future. 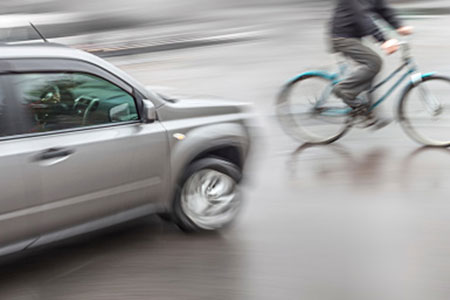 Amy: How about you? Have you ever been in an accident?

Paul: Not a car accident. I was in a bicycle accident.

Paul: I laugh now but at the time, it was pretty bad.

Paul: It was dark and it was Christmas day. And I was on my bicycle going down a quite steep slope and my telephone rang. And I looked at my mobile phone and I took it out of my pocket whilst riding my bike. And looked at it and noticed it was my dad and he was ringing to wish me a happy Christmas.

So I felt sort of compelled to answer the phone. So answering the phone, still going down the hill, probably gathering speed. It's dark and I'm trying to get my dad off the phone as soon as I can. And before I knew it, I drove straight into the back of a parked black car.

Paul: I saw it at the very last minute. So I hit the back of it and my body slammed into the ground, and I broke a few bones, yeah. Yeah.

Paul: Yeah, yeah. It was a pretty miserable Christmas to be honest with you.

Amy: I'd say it's terrible. That's the worst.

Amy: Did the owner of the car see what happened? Did you damage the car?

Paul: I didn't stay long enough. I got out of there pretty quickly.

Amy: And went to the hospital.

Paul: No, I was a bit stubborn. I don't know why. I was the worst night sleep I've ever had but yeah, I didn't go to the hospital until the next day.

Amy: What bones did you break?

Paul: I broke my collarbone, the clavicle.

Paul: And I broke a few ribs.

Amy: Oh no, ribs. That's the worst because they can't do anything for it. They just send you on your way and you just have to cough in pain.

Paul: Yeah. But it could have been a lot worse, you know.

Paul: Yeah. I could have broken my neck.

Amy: So how long did it take you to recover?

Paul: It took me about probably six weeks, I suppose.

Paul: Yeah, because then—actually, in the following —it happened on Christmas day, so three months later in the March, I was lucky enough to win a place in the Tokyo marathon. And I really wanted to do it because it's quite difficult to get. It's like a lottery now. There's so many people who apply to get a position.

So I wasn't going to let this accident stop me from running the Tokyo marathon. So I was trying to rush it, really and I shouldn't have. But I did. I've run there.

Paul: Yeah, I finished it but—

Amy: Congratulations. But how were you? That must have really hindered your recovery.

Paul: It hindered my training period for the marathon, yeah, so.

Amy: But you finished it though.

Paul: I finished it, yeah.

Paul: I wouldn't do it again. Marathons are miserable things to be. Really. Why put yourselves through that pain? I still like running so maybe in the future, I'd do a half marathon or something, yeah. But a full marathon—my marathon days are over, I think. Yeah.

I felt compelled to answer the phone.

When you are compelled to do something, you do so because you feel like you have to. Notice the following:

I was a bit stubborn.

Stubborn means not willing to change for the better. Notice the following:

send you on your way

They just send you on your way.

The phrase 'send you on your way' means you are allowed to leave after being cared for. Notice the following:

I was lucky enough to win a place in the Tokyo marathon.

That must have really hindered your recovery.

To hinder something means to make it difficult to accomplish. Notice the following: