Jeremy talks about being a father for the first time and the joys of being a dad.

Michael: Abidemi: Jeremy, I heard you have a new baby. Congrats on that.

Abidemi: So how has fatherhood changed you in any way?

Jeremy: You know, it's changed me probably in every way. You know, when you think of how your life is different, it's basically from when you wake up until – well, you eventually get to go to sleep. Everything is different.

But, you know, everything about it is positive, even things that you'd think would annoy you actually aren't really that annoying. Like having a toddler come and wake you up at 6 o'clock in the morning when you've got a cold and you've taken a bunch of sleeping medication the night before, like which happened this morning. And even that, having a toddler wake you up and just looking at you and laughing, it's awesome. It really is awesome. 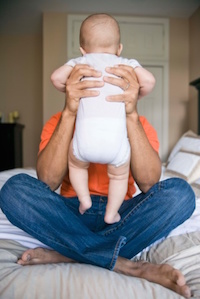 So, you know, I always kind of worried before when I was thinking about having a kid about all these things – oh, I can't go out at night or I'm going to have to wake up so early in the morning and I'm going to be woken up in the middle of the night by a screaming child.

All of that stuff really doesn't bother me. It just, you know, it's part of the experience and yeah, sometimes maybe I'd like to sleep a little bit longer. But yeah, waking up and then having a little guy sit on my lap while he plays with the remote control and changes channels over and over again, I mean, that's somehow a very, very enjoyable experience.

But, you know, you get to see a little person change everyday and start figuring things out. And of course, every person, every parent thinks that their child is the smartest child in the world. He can turn off and on the light switch, you know, but it's those types of things that you just marvel at.

So, you know, I can say like most people that it's everything about it is very positive. But it's often just the really, really small things that make you appreciate this little wonder.

Abidemi: And looking back on the experience now, what are some things that you would wish that you had known before your little boy came along?

Jeremy: Yeah, it's a good question. You know, I was so stressed out for the first couple of weeks after he was born. And from the moment he was born until he came back home, and then for the first number of weeks that we was home, we basically just hovered over him for weeks. And, you know, of course, you have to protective and careful of a new born baby. But not everything was as serious as we thought it was.

And, you know, crying – we were worried about waking up our neighbors or we're worrying that, you know, something was seriously wrong. Babies cry. And if you really get stressed out about it then you're going to make your life miserable.
So, you know, having done it once, just realizing that, you know, kids cry, kids get sick, kids throw up, kids need their nappies changed, I would just take a deep breath if I have to do it again and just realize, okay, this is just part of the experience. And you just got to roll with it.

It's those types of things that you just marvel at.

When you marvel at something, you appreciate it with great admiration. Notice the following:

I was so stressed out.

When you are stressed out, you feel a lot of pressure to do something. Notice the following:

We basically just hovered over him for weeks.

When you hover over someone, you stand over them and watch them carefully. Notice the following:

People often throw up their food when they are very sick. Notice the following:

I would just take a deep breath.

People often take a deep breath to help them relax. Notice the following:

And you just got to roll with it.

When you roll with something, you do not let it bother you. Notice the following:

1356 Baby on Board
Handing a baby while flying.
INT 4
Adam

Video 1356
What annoys you when traveling?
INT 4
Mark / Sorie

Video 1355
Would you like to have a big family?