Curtis talks about his dream house and what he would like in every area of the house.

Spencer: Yeah. So Curtis, what would your dream house be like? Tell me about the kitchen, living room, yard.

Curtis: Well, I've thought a lot about my dream house and designing it. Actually, that's the kind of work that my father does, so he said he could draw the plans up for me. But I've done a lot of art and I really want to work my art into the house.

So the living room, I would like there to be kind of a frieze around the outside of the room where I actually do the art myself. Now, I used to do a lot of construction when I was younger, and so I would really like to take part in the process so that I have a kind of sense of ownership with the house that I've really built a part of that.

The kitchen, I want it to be a very large space and next to a room that has a lot of media so that you can kind of pay attention to things or watch tutorials and recipes while you're cooking, follow along with your favorite chefs or cooking channels. I'd like a really big industrial refrigerator and a huge island that I can work with, as well as a massive sink for cleaning things. 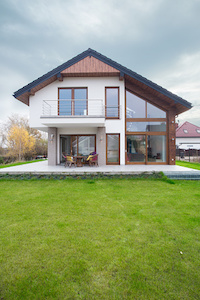 Spencer: Yeah. So tell me about – what would your yard be like?

Curtis: I would like a lot of grass. I really love a yard with nice grass especially when you're playing soccer, you can get under the ball and have a lot of fun like that.

Spencer: It's nice to have a big backyard to play sports.

Curtis: Yeah. I think so as well.

Spencer: What about your bathroom?

I like it to be quite big and have a nice shower as well. Just very nice open area with nice sinks. I don't want to feel constrained in my bathroom. I don't want it to be small. It has to be big.

Spencer: What about your living room?

Curtis: My living room. One of the things that was really important to me for my living room again, is the art that I want to have a lot of details around the outside that are murals or friezes that I have actually created on the wall and so that there's almost a kind of entertaining sense about it. Just being in there before you turn on any other devices or televisions or anything like that. That there is kind of a artistic and comfortable feel to it. It doesn't feel sterile, it feels very homey.

Spencer: Cool. Would you have a big garage?

Curtis: I probably would have a big garage because I really love driving, and I used to race cars at the track. And for the purposes of doing work on cars, or any other DIY work around the house, I would like to have a really big nice garage.

Spencer: Would you have any sort of like swimming pool or – I know you said you wanted a sauna in your bathroom but…

Curtis: I would really like a portion that's maybe separate from the bathroom, that has shutters that open up. So on a nice night, you can actually open it and see out over the yard or whatever landscapes that the house is built next to.

Spencer: That would be cool.

Curtis: But I would like the area to be a little bit private, hopefully surrounded by woods a little bit where you can't see your neighbors immediately.

I want to work my art into the house.

Here, to work into means to incorporate something into something else.

Industrial things are designed to be used for businesses, not personal use.

It's nice to have a big backyard to play sports.

A backyard is a private open area behind a house. Notice the following:

I have a geothermal heating system.

Geothermal heating is heat that comes from the earth. Notice the following:

I want to have lots of murals.

A mural is art painted on a wall. Notice the following:

The bath room has shutters.

Shutters are window covers that open and close using many small panels. Notice the following: