Sarah and Todd discuss having dreams and what happens in them and what they might mean.

Sarah: So do you dream a lot? Do you remember your dreams?

Todd: I usually do. Although, I have to admit, now that I'm older, I don't dream so much. It's pretty rare that I have a dream. But I will have dreams if I'm really stressed or if I'm really sick. So usually, every time I get sick, I notice I'm sick because I have a dream. And I'll wake up in the middle of the night from some crazy dream and then I'll notice, oh wow, I'm sick. So yeah, that's about it.

Todd: Yeah. Although, you know, when I was younger, I used to have all these dreams related to work. I guess they were stress related. And the craziest dream was, I was a waiter at a very fast-paced restaurant, and it was very stressful. And you had to wait on about 10 tables, and people would come in and you have to get their food fast. And if you didn't, you'd get yelled at by the boss or the customers would be upset.

So I used to have this dream – and this is when I was in college, that I would be sleeping and there would be a table in my room and the customers would be sitting there watching me sleep, and they would be furious because I wasn't bringing their food. I was like just sleeping in the bed right next to their table. And it was the same nightmare I had for – like again and again and again. It was crazy.

Sarah: That's really interesting. And kind of funny, too. 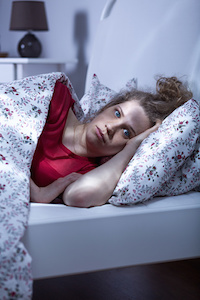 Todd: Yeah, I know. And it's weird how you have the same recurring dream. I used to have another dream, a nightmare when I was young. And it would be – I was riding a bicycle up like a mountain and the mountain was – like had a path that just kept going around and around the mountain. And you had to be really careful or else your bike would fall off the cliff. And then, my bike of course would go off the cliff and I would fall, fall, fall and you would wake up right before you hit the ground. I had that dream many, many times when I was a little kid. Do you ever have nightmares or any dreams like that?

Sarah: Yeah. I don't dream very often but I have this one reoccurring dream also where I am in school and it's at the end of the semester and I suddenly realized that there's one class that I haven't been going to the entire semester and I'm going to fail it. So I panic and I'm running around like trying to find my professor to like try to figure out what I need to do or what I need to study for the final exam so that I don't fail this class. But what's really interesting about this dream is I found out a few years ago that my father has the same reoccurring dream.

Todd: Wow. You know, this is going to sound crazy. I've had that dream, too. I've had a dream of like I registered for a course in college and I never went to the course, and I'm going to get an F. And I don't even remember when I registered or where the class is but I didn't finish the class. Is that the same dream?

Todd: Wow. I wonder what it means.

Todd: Maybe there's somebody out there that really knows what it means and they're like, "Uh-oh, those two people are doomed."

Sarah: There must be a lot of people with that dream.

Todd: Yeah. And maybe that's it, like there's certain structures. Like I know that the bike dream that I have about falling off the cliff, I've heard that many people have that. Yeah.

Sarah: No, I've never had that one.

Todd: Yeah. That was one when I was really little, but yeah.

Sarah: I've heard that some people – a lot of people have dreams about their teeth falling out and that this means that like they're afraid of losing something in their life. Something that's really important to them.

Todd: Oh wow. So if you're teeth are falling, you're going to lose something.

Sarah: Or you're afraid of losing something because most people, their teeth are really important to them.

Todd: Yeah. Interesting. Well, I don't have any nightmares anymore. It's pretty rare. How about you?

You had to wait on about 10 tables

Here, to wait on means to serve people or take care of their needs. Notice the following:

They would be furious because I wasn't bringing their food

Furious means to me very mad about something. Notice the following:

It's weird how you have the same recurring dream.

Something that is recurring, or reoccuring, happens again and again. Notice the following:

So I panic and I'm running around

When you panic, you react suddenly to uncontrollable fear. Notice the following:

I found out a few years ago

'To find out' meand to realize or learn something. Notice the following:

I registered for a course in college

When you register for something, you sign up for it. Notice the following:

wait on • furious • recurring
panic • find out • register for

1373 Sleeping Patterns
How much sleep do we need?
INT 4
Adam

Video 1374
Do you remember your dreams?
INT 4
Danny

1371 Her Dream House
Spencer talks about her dream house.