Listen to two talk about their weekend and cleaning their homes. 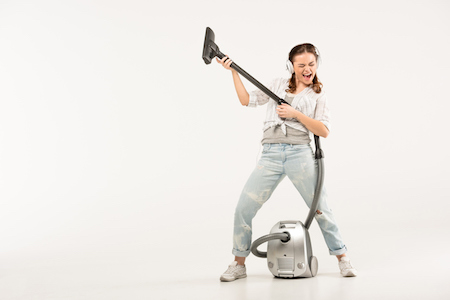 Todd: Hey Meg, so let's talk about our life history.

Todd: So first, when were you born?

Meg: Not too long ago.

Todd: OK, so when did you graduate high school?

Meg: What about you?

Meg: Ah, when I was three years old.

Todd: Wow, yeah! Ah, we were probably about the same intelligent level.

Todd: And when did you graduate from college?

Todd: I graduated from college in 1993, so like you I took a little extra time to graduate.

Todd: And when did you get your first job?

Meg: I got my first job when I was seventeen years old, I think. When I was still in high school.

Todd: What did you do?

Meg: I worked at a wedding shop, a wedding dress shop, so I helped to assist the customers and clean the dresses.

Meg: Because brides can get a little crazy.

Todd: I can imagine.

Meg: What about you? What was your first job?

Todd: Well, my first unofficial job was when I was thirteen. I was a dishwasher.

Meg: Oh, at a restaurant.

Todd: Yeah, and I think it was illegal because I was 13, but yeah, I was a dishwasher, but then my first official job was at McDonald's

Meg: Oh, what did you do there?

Todd: I made the filet-o-fish. But I got fired

Todd: Also, again I lied about my age, so actually wait, I was fourteen, and I lied and said I was fifteen and they fired me, but I worked there for three months.

Todd: And I got paid.

Todd: OK, so when did you meet your best friend?

Meg: Wow! So you've been best friends for a long time.

Todd: A long time, yeah, yep. So how about phones? When did you get your first phone?

Meg: Hmm! I think I got my first phone when I was also seventeen, the same year I had my first job. It was my first cell-phone, was that year. What about you?

Todd: Well, I got my first phone also when I was seventeen, but it was a real phone. My parents gave me my own phone line in my house, so I had a phone in my room. Back then that was common in the 80's, so young high school people would have their own phone in their house

Meg: Yeah, some of my friends had that when I was growing up also, but I wasn't lucky enough to get my own phone until I could pay for it myself.

Past tense verbs usually end with an -ed ending but only for affirmative sentences. For questions and negative statements we use did to express the past. See below.

There are three ways to pronounce the -ed ending.

I washed the dishes
I walked to work.
I worked at my desk.
I talked to my friend

I cleaned the room.
I enjoyed the movie.
I mowed the lawn.

I wanted to go.
I decided to stay.
I needed to sleep.

I did not work.
I didn’t sleep much.

3-10 Superlatives
Todd talks about the best place in his city. 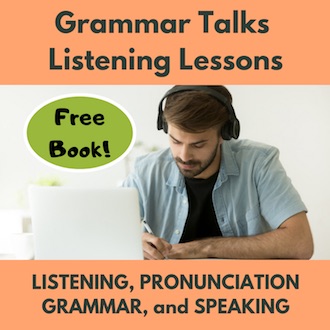