Hisa has a complaint about vending machines. She explains why. 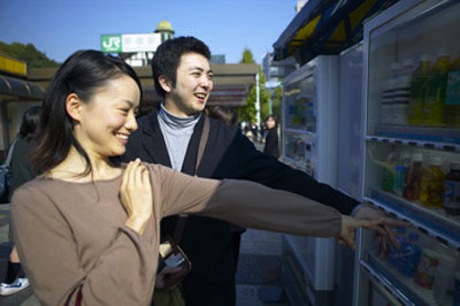 Todd: How are you doing?

Hisa: Fine thanks, and you?

Todd: I'm doing pretty good. Hisa, you were telling me that you have a concern about Japan.

Todd: And what is your concern?

Todd: OK. Can you talk a little about that?

Hisa: Yes, as you already noticed, how many vending machines do you come across a day if you are on the street?

Hisa: I really do not think we need that many and then each one is really consuming energy, so that is my big concern.

Todd: OK, so what would you like to see happen in Japan with the vending machines?

Hisa: Sorry, what? where?

Hisa: Number 1, it really aggravates the scenery. Yes, and then if each one of us take drink with us, we really don't need that many, each corner, or even one corner you really see so many kinds. And then that is, we can really evacuate so many and then we will have a safer, more space on the road, because even without vending machines, imagine how narrow our roads in Japan, even the walking path so narrow, it's dangerous.

Todd: And you were saying that you can actually can see vending machines in very strange places in Japan, like very, very far places in the countryside?

Hisa: So, just one example is on the summit of Mt. Fuji. Yes, it's a shame.

Todd: All the way on the top of Mt. Fuji?

Hisa: Yes. So those mountain climbers are talking that don't make our mountains like Mt. Fuji. In other words, they are not to put another vending machine on the top of other mountains, because why we need it.

You were telling me that you have a concern about Japan.

A 'concern' is something that you are worried about. Notice the following:

There's just so many vending machines in Japan.

'Vending machines' are machines that sell snacks and beverages.  You put in your money and choose which item you want and it falls to the bottom of the machine. Notice the following:

Each one of those machines consumes energy.

When we use energy we are 'consuming' it. We can also use 'consume' to mean eat when talking about people. Notice the following:

Having so many vending machines really aggravates the scenery.

To 'aggravate' something means to make it worse or more severe.   We frequently use this verb to mean the same as annoy when referring to people. Notice the following:

There's a vending machine even on the summit of Mt.Fuji.

The 'summit' of a mountain is the highest point. Notice the following:

91 Dear Old Dad
Kerri talks about her father is special.

Complete the sentences with the words below.
concerns • vending • consumes
aggravate • summit