Phil talks about his stay in China and the famous places he visited. 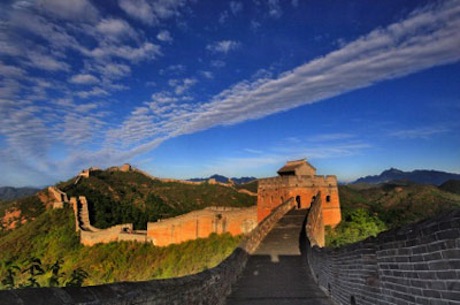 Todd: OK, Phil, you just got back from living in China.

Phil: Yeah, I lived in China about two years ago.

Phil: China was an eye-opener. It's a very old culture, but there's not many new, there's not many old things around in China, through wars, through the cultural revolution, a lot of stuff's been burnt, a lot of stuff just's been knocked down. One of the few old things that is there is the Great Wall of China. It's very famous this wall, very big. They are doing some efforts to try and build the wall up again, but when I was there, I believe it was August, 2002 it was still mostly old stuff.

Todd: Yeah, what else did you see in China?

Phil: Yeah, it's really an impressive thing to see. Those are the two really old man-made things that I saw in China.

Todd: Was there anything else that was really spectacular?

Phil: The Three Gorges tour was really good. Sadly they are all under water now because of the dam project, but I was able to go shortly before it was flooded and really, really enjoyed it. Saw a lot of beautiful things. Surprisingly enough the water was a lot cleaner than I thought and I actually went swimming in it.

Phil: Yeah, for, this is the Yangzhe River in China and if you've ever seen the Yangzhe, most parts of it, you certainly wouldn't want to swim in it, but these parts were pristine.

China was an eye-opener.

An 'eye-opener' is a surprising or shocking experience.  The phrase refers to when you open your eyes really wide if you are surprised.  Notice the following:

A lot has been knocked down.

To 'knock something down' is to destroy it until there is nothing left.  This is when construction companies hit a building with a big heavy ball.  Notice the following:

Something that is very interesting is 'fascinating.'  Notice the following:

Those are the two really old man-made things I saw in China.

Something that is 'man-made' is not natural and has been built or constructed by humans.  Notice the following:

These parts of the Yangtze were pristine.

If a place is 'pristine' it is pure, natural and people have not changed it.  Notice the following:

Complete the sentences with the words below.
eye-opener • knock down • fascinating
man-made • pristine