Jason is a digital artist. He talks about his art and web site. 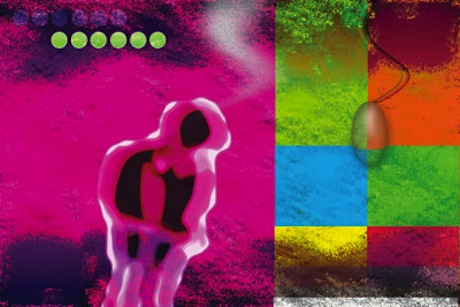 Todd: Now Jason, you're an artist.

Todd: What kind of artist are you?

Jason: I draw all sorts of things, but mostly I like to draw on the computer, using photoshop.

Todd: OK, was it hard to learn?

Jason: Oh, not really. It's just practice. You know if you feel like you want to draw one day, that means you're an artist I guess.

Todd: Wow, I didn't even know that, I mean I do pictures for the web site, but I didn't know you could draw on the computer.

Jason: Yeah, yeah, that's right. I've made my own web site as well, so.

Jason: A bit of a mouthful though.

Todd: Yeah, I'll have to write that one down. That's pretty tough.

Todd: So when people go to your web site what can they see?

Jason: Not a hell of a lot but I did draw everything on there myself, every button every single piece of graphic you see on there I drew, just photographs of me, my friends, drawings that I've done and posted up and not really much else, but it's good if you just want to check it out. Check some photos out.

ITodd: 'm sure it's great. Actually I'm going to check it out later tonight. So, I'll link it from my web page to your web page.

Todd: Is it OK if people write you?

It's not hard, it's just practice.

To 'practice' something is to do it many times to improve your abilities.  Notice the following:

If you feel you want to draw one day.

In the example sentence 'feel' basically means 'think.'  It refers to a future plan.  Typically we use this word to refer to emotions about something.  Notice the following:

The web address is a bit of a mouthful.

In this sentence 'mouthful' implies that the address is either a lot to say or difficult to say.  Notice the following:

My drawings are on the web site.

A 'drawing' is a pictured created by a person using their hands and many connected lines.  Drawings are the work of an artist.  Notice the following:

If you 'check out' a website you look at and explore it.  Notice the following:

Complete the sentences with the words below.
practice • feel • mouthful
drawings • check out