Matt is given a word, an adjective, and says the first work that comes to his head. 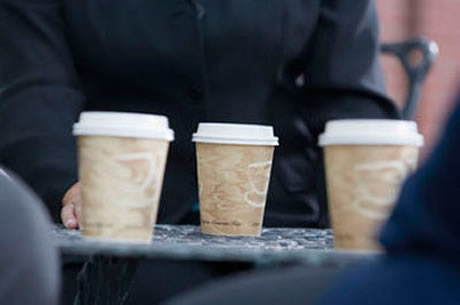 Todd: OK, Matt, we're going to talk about adjectives. What is strong?

Matt: Well, I'm not sure. They serve Viennese coffee. Which is supposed to be from Vienna, but when you go to Vienna, the coffee there is just small strong coffees. Viennese coffee in Japan has like cream on top and things like that, so it's like a new take on Austrian coffee.

Matt: What is weak? English coffee, I suppose. The English aren't really very good at making coffee compared to other people, other countries in Europe, so yeah, English coffee is generally weak.

Todd: OK, well it's the same in America, so. Alright, what is heavy?

Matt: Yeah, as in the music.

Todd: Oh, OK. Do you listen to heavy metal music?

Matt: I used to. I used to be in a rock band when I was at college, and it was kind of punk, heavy metal, but I used to listen to a lot, not so much anymore.

Todd: Did you play?

Matt: I was the singer.

Something that has a lot of flavor is 'strong.'  Notice the following:

A 'new take' on something is a new or modern version of something old or traditional.  Notice the following:

'Weak' coffee does not have a lot of flavor and you can generally see through it.  Like brown water.  Notice the following:

What is weak? English coffee, I suppose.

We can use the phrase 'I suppose' when we mostly agree with something, but maybe we have some doubts about it.  Notice the following:

Did you play in the rock band?

In this case 'play' refers to making music with an instrument.  Notice the following:

Complete the sentences with the words below.
strong • new takes • weak
suppose • played