Jessica gives some ideas for people wanting to go to Spain. 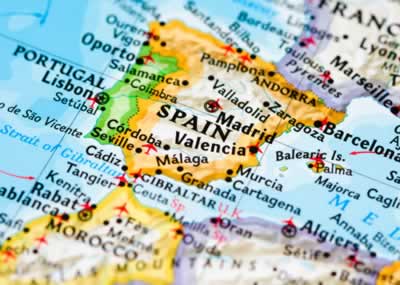 Todd: OK, believe it or not I'm going to Spain this summer.

Jessica: Are you really?

Todd: Yeah, yeah, on my way home I decided to stop over in Europe.

Todd: So I plan to spend about ten days in Spain.

Todd: What do you recommend I do?

Jessica: OK, well, I lived in Madrid, so I'm a little bit partial to that city. It's a really, really, nice time.., when are you going?

Todd: I should get there mid August.

Jessica: OK, then stay away from Madrid because it's too hot. It's about like 40, 45 degrees Celsius, so it's really, really hot. So, the south is really, extremely warm as well, but the north and the east coast is really nice, cause they have a lot of really nice beaches, and Barcelona is really beautiful. It's a really great place. They have this cathedral there by Gaudi which is incredible, it's incredible. Ah, Valencia is really cool. It's a very nice place to go. They have a really nice beach. A really nice downtown city. The southern coast is really nice. They, but it's incredibly hot, like I said so, so you definitely have to take advantage of the siesta, and sleep through the majority of the day and then stay up late at night, so you wouldn't burn outside basically, so sleep away the warmest part of the day, but.

Todd: OK, now if I can go to one country around Spain - Morocco, Portugal, or France, which one would you recommend?

On my way home, I decided to stop over in Europe.

If you 'stop over' someplace you go to a location that wasn't part of your original plan.  Usually you are passing over or through this location and decide to stay for a short period of time. Notice the following:

I lived in Madrid, so I'm a little bit partial to that city.

If you are 'partial to' something you have a biased opinion in favor of it or you think it is better than other similar things. Notice the following:

I should get to Spain mid August.

'Mid' is a short way of saying 'in the middle of.' Notice the following:

You have to take advantage of the siesta, and sleep through the majority of the day, so you wouldn't burn outside.

When you 'take advantage of' something you make use of it for your own personal gain. Notice the following:

If you want something very exotic and different, Morocco is definitely the place to go.

Something that is 'exotic' is very different from what you are used to in an interesting and exciting way. Notice the following:

Complete the sentences with the words below.
stop over • partial to • mid
take advantage • exotic