Marion talks about a story she read about mushrooms. 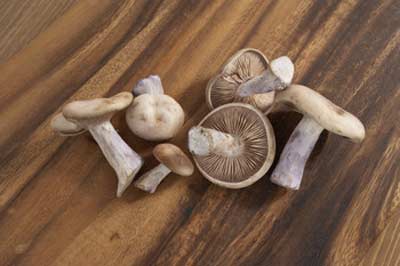 One of my friends told me she read a story in the paper today about a man who died from eating mushrooms, which I thought was quite strange because this old man lived in the mountains I think, or lived in a country area where he would have eaten mushrooms almost every day, I think, or while they were in season at least, so it made me think of when I was younger and I used to go out picking mushrooms with my granddad, so sometimes, around now, around autumn time, when it had been a very, very wet night, maybe especially that would be good for finding mushrooms the next day, so we'd go out maybe, maybe three or four of us, my brother and I, and my granddad, sometimes other members of the family would come to or other children who are around to play, and we go picking mushrooms, but I don't think I ever, well, I suppose I did pick up mushrooms, but most of them, most of them were the same type so we didn't have to worry to much about poisonous mushrooms where we were cause I think there mostly they were, they were OK, but my granddad would have told us anyway which ones we could pick and which ones we couldn't, so it seems strange to me that a man who, who you know would have been really familiar with these mushrooms would actually die from it, but I haven't read the whole story, so I'm not really sure what happened but my friend seems to think that he ate these mushrooms a lot and then it was just a gradual build up of the poison in his system, which is kind of an awful way to die really, especially when you are, when you live that close to nature and you're eating all the food that nature offers you, that nature always offered us.

It does seem a bit unfair really, but yeah, there are lots of foods I suppose that can do you more harm in the long run, but in Ireland as well, my mother was really surprised that I started eating raw mushrooms, so while I was in Australia we used to have raw mushrooms and sandwiches, which I never had before, but I thought was quite tasty, so when I went home I'd made some sandwiches with raw mushrooms but my mother was really surprised and was wondering what the hell I was doing eating raw mushrooms because we never ate them, unless they were cooked so I suppose that was one way as well as insuring that they were safe to eat, that maybe well my mother seemed to think anyway that raw mushrooms were, would be quite dangerous, also one of my colleagues this morning asked me if I'd ever eaten a pine mushroom, so I'd never heard of before but, he was telling me that, that they're a delicacy here in Japan and that I should really try one, even though they are very expensive, he said between 3 and 5 thousand yen, I think they cost, so I'm not really sure, what the taste is but maybe they're something like I don't know. I think, he said something like that there was a really strong smell, so maybe a similar smell to truffles in France or Italy maybe. I'm not to sure, but sounds interesting anyway.

He would have eaten mushrooms almost every day, I think, or while they were in season at least.

It seems strange to me that a man who would have been really familiar with these mushrooms would actually die from it.

If you are 'familiar' with something it means that you have a lot of experience with it, it's not something new for you.

It was just a gradual build up of the poison in his system.

When there is a 'build up' of something it means that the level gradually increases.

There are lots of foods I suppose that can do you more harm in the long run.

The phrase 'in the long run' refers to effect something will have over a long amount of time.

They're a delicacy here in Japan.

A 'delicacy' means that the food is considered special in a particular culture. Delicacies are usually foods that are uncommon and expensive.