Miki talks about her university. 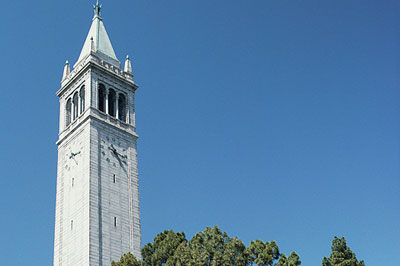 Todd: Miki, you went to UC Berkeley, a very famous university in the U.S. What is your university like? Why is it famous?

Miki: Why is it famous? Well, I suppose historically it's kind of famous, recent history, because it was a center for the freedom of speech movement in the 1960's and the civil rights movement, and it's pretty much where multi-culturalism, feminist studies and those sorts of so called liberal political movements were born and they're still quite strong today on campus and so students kind of get drawn to that, the political aspect of it I suppose, also the, it's a research university and it attracts nobel laureates, very famous professors, at the top of their field, it's also quite a beautiful campus, I love the campus, it's not, it's not, how do you say?

Todd: It's not like maybe a college town, or?

Miki: Ah, no, it's not really a college town, of course, because it's right smack in the middle of a metropolitan area which is the Bay Area, and just right across the bay from San Francisco. The natural scenery is quite beautiful. There's the ocean to the west. There are mountains to the east and just beautiful gorgeous sunsets going down into the Golden Gate. The natural scenery is just beautiful, and the architecture of the campus is quite beautiful too, and apparently during the war, World War II, a number of tests were done on campus in terms of integrating floral species with each other, and so you have firs next to cedar which is a strange combination. The idea was would they kill each other.

Miki: Yeah, no, so there's some scientific engineering going on on campus.

Todd: But the trees survived?

Miki: Yes, as a matter of fact.

Miki: No. no, but it is a beautiful campus, and I went there for four years as an undergrad. I lived in the dormitory for the first year and I lived in the co-ops from the second through the fourth year and the co-ops are kind of a housing community that's owned by students, it's run by students and is there for quite cheap so it attracts poor students who work, while they go to school at the same time, and that's who I was. I worked at a restaurant, I worked at a sandwich shop, I worked at a toy store, I worked as a secretary to put myself through school and lived quite cheaply in these co-ops which incidentally also had marvelous parties and almost every weekend there was some party somewhere that one of these co-ops was putting on, and it was really wonderful.

It was a center for the freedom of speech movement.

Students kind of get drawn to that, the political aspect of it.

When you 'get drawn' to something it means that you become interested in something or feel a pull to be a part of it.

It's right smack in the middle of a metropolitan area which is the Bay Area.

A 'metropolitan' area is a large city and usually includes the suburbs around it.

When you 'can't fool' something it means that you cannot trick it or deceive it.

put myself through school

I worked as a secretary to put myself through school.

When you 'put yourself through school' it means that you finance your own studies. Maybe you do this by saving a lot of money before you start school or maybe by working while you are in school.

376 Life History
Miki talks a little about her background.