Mary talks about her dogs. 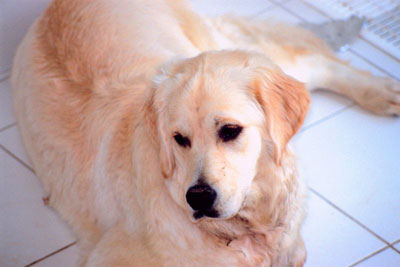 Adrienne: So, Mary, who are these guys here?

Mary: This one's Piper. She's seven. She just had a birthday in October, and this one's Daisy, she's got kind of an older face on her. I think she's probably about nine years old.

Adrienne: Are these your children?

Mary: You know, they could be my children, but they’re actually dogs. Golden Retrievers.

Adrienne: They're so pretty.

Mary: Yeah, they're a lot of my attention. They really have my heart captured right now, so I do spend a lot of time, you know, working on them and training them and taking them out for walks during the day and as you can tell by the big giant basket behind you they have a lot of toys so they're kind of active. They like swinging stuff around and playing outside. (Pipe. Hi, there!).

Adrienne: So how did you get them?
I actually raised a Golden Retriever puppy for about 8 years. When I lost her, I remember thinking to myself, I'd love to have another golden retriever but puppies are really hard work, and wouldn't it be great if I could just find a dog that was already an adult, and I made mention to it to someone at work one day and she let me know of an organization, a rescue organization that worked primarily with Golden Retrievers, so I contacted the organization and they had several dogs available for adoption and I went and met a few, and kind of figured out their personalities and decided that there was one there for me, and that was Tucker, my big, big male who I had for a long time, so I ended up adopting him when he was a year and a half. He still had a lot of puppy in him, but he was already housebroken, and you know, in pretty good shape for bringing home so he was a lot of fun. That was my first experience with the organization, and they are a great organization. I really believe in a lot of the work they do, because a couple of the dogs, Piper in particular, happen to have been an abused animal unfortunately in the first part of her life so this organization spent a lot of time kind of evaluating the right kind of environment for an animal, and the right kind of animal for a family so the adoption process, as they call it, it's really involved, It's almost like adopting a child because they want to make sure that you're home is, you know properly set up for a dog this size and that your yard is fenced and that you can handle a dog like this and have what it takes to train him and get him to trust humans again so it's been a really long process in some cases. When I adopted daisy, almost two years ago, that was not so hard. She was a very easy dog to adopt. She just came in, made herself at home, got along great with Piper right away and, you know, she has never given me any concern or any reason to worry about her temperament. She's been just such an easy going dog.

Adrienne: Yeah, she seems like a sweetheart. Both of them are.

They really have my heart captured right now, so I do spend a lot of time, you know, working on them and training them.

When something is 'captured' it means that it is taken and imprisoned without you being able to do anything about it. In this case, 'captured my heart' means that something has your attention and your interest.

They had several dogs available for adoption.

'Adoption' is when an animal or person is given a home by people who have volunteered to take them in. If you adopt an animal you usually don't have to pay for it or you pay very little. With humans the adoption process is very long and expensive.

He was already housebroken, and you know, in pretty good shape for bringing home.

When a pet is 'housebroken' it means that they are toilet trained and do not go to the bathroom in the house.

A couple of the dogs, Piper in particular, happen to have been an abused animal unfortunately in the first part of her life.

When something is 'abused' it means that it is treated in a very bad way. It usually means that someone is physically violent towards the animal or person.

She has never given me any concern or any reason to worry about her temperament.

A person's or animal's 'temperament' is the same as their character and personality. Temperament is used to describe whether a person or animal is gentle, violent, calm or full of energy on a normal basis. It is not used to talk about the current moment, but in general.

376 Life History
Miki talks a little about her background.