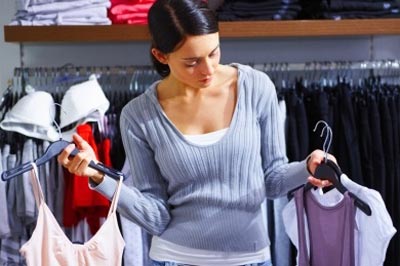 Ruth: Hey Akane, didn’t we have a really good time in the city in Oita last weekend?

Akane: Yeah we had a great time. I’m glad we went.

Ruth: And wasn’t it good that we managed to get some shopping done?

Akane: Definitely. I think we got a little carried away though.

Ruth: Possibly yeah, possibly. What did you buy again?

Akane: I bought a new skirt and I’m wearing it right now.

Ruth: Yeah, yeah. Is this the first time you’ve worn it?

Akane: It is actually.

Ruth: And did you buy anything else?

Akane: Erm I think I bought a new CD.

Ruth: That’s right you did. Yes and we also bought a few things from the 100 yen shop didn’t we?

Ruth: Yeah it was a good day.

Ruth: It was fantastic! You know that’s the biggest 100 yen shop that I’ve ever been to!

Akane: Me too. Five floors! Can you believe it?

Ruth: I know, it’s fantastic! I seem to remember we were in there for about 2 hours, were we?

Ruth: I think we were in there for quite a long time.

Akane: We were. We were really enjoying ourselves in there.

Ruth: But it was worthwhile.

Akane: Definitely. What did you buy?

Akane: Yeah I think you did.

Ruth: Yeah it was really nice. I bought a t-shirt and I bought a dictionary.

Akane: Oh that’s right, your dictionary! Have you used it yet?

Ruth: Erm I’ve used it a couple of times but maybe not as much as I should have.

Akane: Well hopefully it will help you to study Japanese.

Akane: It was quite a big dictionary.

Ruth: Yeah, yeah it was expensive so…

Akane: How much was it again?

Ruth: It was three and a half thousand yen, three thousand five hundred.

Akane: So that’s about35 dollars.

Akane: It is for me too.

Akane: But books are important.

Ruth: Absolutely. Don’t you think we should go back to Oita sometime?

Akane: Definitely. When do you want to go next?

Ruth: Why don’t we go next weekend?

Akane: That’s a great idea and we can do some more shopping.

Ruth: Brilliant! Ok, let’s do that next weekend

We had a great time. I’m glad we went.

If you are glad you feel joy or pleasure, and this is usually the result of doing something that makes you feel good. Notice the following:

Wasn’t it good that we managed to get some shopping done?

If you "manage to" do something, you complete or achieve something even though is difficult. Notice the following:

Definitely. I think we got a little carried away though.

If you "get carried away," you become too excited or emotional about something and become irrational. Notice the following:

But it was worthwhile.

If something is "worthwhile" then it is worth the amount of time, effort or money that you use to obtain it.  Notice the following:

Brilliant! OK, let’s do that next weekend.

If something is brilliant it is great, fantastic or really good. Notice the following:

516 Life in Africa
Carla talk about living in Africa.