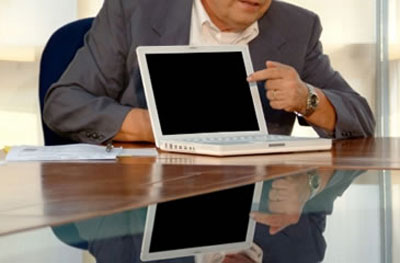 Todd: Well, that is actually perfect because I have two MacIntosh laptops and I'm selling one of them.

Mark: Well, that's not too bad because I have another computer that I can watch DVD's on.

Mark: How long have you had it?

Todd: I've had it for about three years, and it works great, like it's great for the internet. It's great for lots of things. I just unfortunately accidentally broke the DVD because I had a problem. I couldn't get a DVD out and I foolishly tried to get it out the wrong way, so but it still works. There is one other problem. It has a power cord and I lost the original power cord for it.

Mark: Right, OK, so I need to buy a new power cord.

Todd: You need to buy a new one.

Mark: And how much will that set me back?

Todd: That will probably cost you about 6,000 yen.

Mark: So that new Mac that you got over there, how much was that new?

Todd: If you buy it new, well this is an older edition, but now they're about 100,000 yen. They're actually quite a good deal. That's why I'm selling it so cheap because you can buy a new Mac for pretty cheap.

Mark: Right. OK. Sounds a good deal. Can I build websites on that one?

Todd: Yeah. You can pretty much do anything. It has a lot of capabilities. It's very easy, and if you like the TV show the Sopranos, I'll throw in a bunch of DVD's as well.

Todd: So you can watch them for free.

Mark: OK. That sounds like we may have a deal.

Mark: Yeah. Let me talk to the girlfriend about it. See if she wants to buy a Mac because it's her money, too. Maybe I need to borrow some money off her.

Mark: And then we can do the deal.

that is actually perfect

That is actually perfect, because I have two MacIntosh laptops and I'm selling one of them.

'That is actually perfect' means that something has no flaws or it works out really well with how your life is going.

I just unfortunately accidentally broke the DVD because I had a problem.

To do something 'accidentally' means that you did it by mistake or did not intentionally do it.

I couldn't get a DVD out and I foolishly tried to get it out the wrong way.

How much will that set me back?

When you ask someone how much something will 'set you back,' you are informally asking how much it will cost. This form of the question is used mostly between friends.

we may have a deal

'We may have a deal' means that you and someone else might be able to agree on a type of exchange. You can say 'we have a deal' when you agree with the price or conditions that someone suggests to sell you a service or an item.

759 Little Sister
Lupe talks about having many siblings.
﻿
INT 5
Lupe

756 Changing Weather
Changes in the weather that Tim notices.

Complete the sentences with the words below.
perfect • accidentally • foolishly
set me back • deal