Mark talks about how he combines his interest of traveling and prisons. 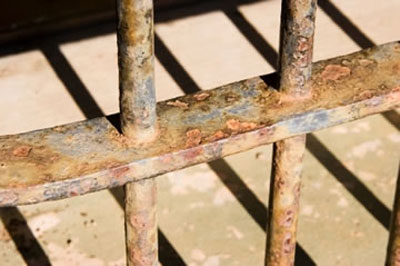 Todd: And you've actually done a lot of unique things that people don't do when they travel. You were saying that when you travel you like to look at prisons.

Mark: That's right. I have a strange fascination with prisons when I go traveling.

Todd: Is it your conscience? Do you feel guilty that you should be in prison?

Mark: Not really, no but I don't know why but the history of prisons is fantastic. For example, obviously the most famous one's Alcatraz.

Mark: You go there. Now you can take an audio tour. Have you ever taken that?

Todd: You know, I'm from San Francisco and I've never been to Alcatraz.

Mark: Ah, it's fantastic. It was one of the best places I visited in America. It was Alcatraz prison. And you can take the audio tour and listen about all the ex-convicts. What they did and what daily life was like in Alcatraz. Really, good.

Mark: You should do. You should do it. And another prison that I visited that's very famous was Robben Island just off the coast of Cape Town in South Africa, and that's where Nelson Mandela spent most of his days.

Todd: Do they still have his room made up?

Mark: They do. They have his room all still made up, and you can read lots of leaflets about Nelson Mandela and hen they take you, show you the work yard, and basically he was spending, I think was twelve hours per day working outside in the South African heat.

Mark: You can see all around the prison yard. That's really interesting.

Todd: So you've seen the prisons in South Africa and in America.

Mark: Also I went to a crazy prison in Kuala Lumpur in the center on Malaysia.

Mark: Yeah. As you arrive at the airport, if you take the monorail from the station into central Kuala Lumpur, then you see the old prison. It's now closed, but outside the prison, on the walls, it's got lots of graffiti and basically the government has written the graffiti and it basically tells you do not smuggle drugs into Malaysia or you will be staying here for a long time, and the prison looks like the worst building you've ever seen in your life.

Mark: Yeah. I think I got this fascination for prisons because near my house in England there used to be a big prison that looked like an old castle, old scary castle and I used to pass that sometimes when I was going to work when I was younger, so that's why I have this strange interest in prisons.

I have a strange fascination with prisons when I go traveling.

A 'strange fascination' means an unusual and extreme interest in something.

is it your conscience

Is it your conscience? Do you feel guilty that you should be in prison?

'Is it your conscience' means 'do you have guilty feelings about doing the right thing'?

You can make the audio tour and listen about all the ex-convicts.

'Ex-convicts' are people that used to be in prison.

You can read lots of leaflets about Nelson Mandela.

'Leaflets' are small brochures that have useful information on them.

I went to a crazy prison in Kuala Lumpur in the center of Malaysia.

A 'crazy prison' is a prison that it is not what you would consider to be normal.

774 Spanish or English
When to use English or Spanish.
﻿
INT 5
Lupe

773 Being Bilingual
Being a native speaker in two languages.
﻿
INT 5
Mark

Complete the sentences with the words below.
fascination • conscience • ex-convicts
leaflets • prisons