Mark talks about a wild water ride he took during his stay in New Zealand. 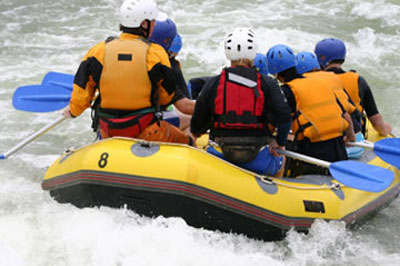 Todd: So, Mark you said that you do crazy things when you travel. Can you give an example?

Mark: Yeah, one of the best things that I did was white water rafting in New Zealand. We actually rafted down the highest commercially rafted water fall in the world, I was told at that time.

Todd: What does that mean, the highest commercial waterfall?

Mark: Well, I think it's the one that's can only be taken by tour groups because it's safe. If it's any higher then that one, then it's deemed unsafe and they wouldn't be able to take tour groups rafting. You'd have to be a professional rafter.

Todd: So you go over the top?

Mark: We went straight over the top, yeah. It was crazy. And I was sat right at the back of the raft and they called this the ejector seat.

Todd: So did you camp over night or was it just a one day event?

Mark: No, this was just a one day, just to do that one waterfall. We wanted to do the highest one.

Mark: But I would like to go on - I think in Europe, especially, if you go to a place like Turkiye, Spain, you can do like four and five day raft trips, where you camp as well at the side. I'd like to do that.

Todd: Yeah, in the States it's quite popular along the Colorado River.

Todd: Don't you need like special training, or do you just hop in the boat and go?

Mark: I think it depends on how difficult the river is, so I'm sure there's beginner rivers, where you don't need so much training. Maybe a few hours. For that one that I did, with the waterfall, the lecture they gave us was about 25 minutes before we started.

Mark: Not so many places to go white water rafting, because I don't think the rivers are big enough, or wide enough. There's some good places for canoeing, or kayaking. I know we have the national kayak center in Nottingham, England, which is pretty good. Yeah, but not so much for rafting.

We actually rafted down the highest commercially rafted waterfall in the world.

'Commercially' refers to the fact that people pay to raft down this waterfall. It is used as a way to make money.

If it's any higher than that one, then it's deemed unsafe and they wouldn't be able to take tour groups rafting.

When something is 'deemed unsafe' it means that it is decided to be dangerous.

I was sat right at the back of the raft and they called this the ejector seat.

The 'ejector seat,' in this instance, refers to the seat at the back of a boat that makes people rise and fall in their seat due to the bumpy ride.

The instructors basically tell you to curl up into a ball.

When you 'curl up,' it means that you bring your knees into your body, put your arms around them, and try to make yourself as small as you can.

The waterfall actually spits you out, shoots you back out the top.

When something 'spits you out,' it means that it propels you away from where you were. Example, when you are chewing gum and you don't want it anymore, you spit it out.

Complete the sentences with the words below.
commercially • deemed • ejector
curl up • spits you out