Lupe talks about being a native speaker in two languages. 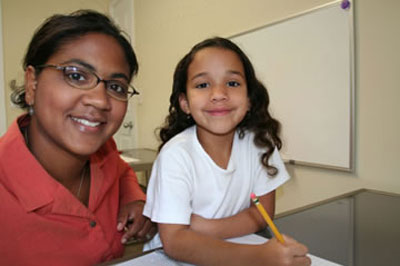 Kara: So, Lupe, you moved to the United States when you were about eight, and you had to learn English because Spanish is your first language. What did you think about bilingual education in the United States?

Lupe: You know coming in, I was really, really scared of not being able to communicate with other children and being able to fit in. But coming at a really young age like that, you realize that it's not as hard to learn the language and the school I happened to go to had a great bilingual program and they were actually helping us continue our Spanish speaking education and the reading and writing, which was great because I never wanted to lose that aspect of my life and a lot of kids had to do that because there are schools that don't have bilingual programs, so a lot of kids our born and raised speaking Spanish, but once they start school and they start learning English they really forget their Spanish, so it was really important for me to be able to learn the English language, but still be able to know the Spanish language and it's a great benefit because now in my job it really helps me to be bilingual and not only to speak both languages but to be able to read and write both because it's really important to be able to communicate with other people not only, you know, speaking but also in reading and writing.

Kara: Now, you've also taken classes in French in school. Do you think it has been easier learning French through a textbook or learning English being thrown into the United States and having to learn it?

Lupe: I think learning a second language made it that much easier to jump in to a third language. You already sort of have a foundation of what it's like to start learning to speak a different language and communicate in a different language, but as you get older I definitely think it gets a little harder with pronunciation and different, you know, different aspects of the language and learning it, but I think it depends a lot on the teachers and the way they teach the language because I can read a textbook and try to understand what they are teaching but it's a lot easier when I have someone in front of me who knows the language, who can answer my questions and not only that: someone I can listen to and see the pronunciation and make sure that I'm doing it correctly.

Kara: Now, do you think it would be easier for you to learn French if you actually went to France and lived there?

Lupe: Definitely. I think being around other people that speak the language make it that much easier to learn the language and I think that's why I learned to speak English when I moved here so quickly because I was surrounded by people who primarily spoke English, so there were times when I had no choice but to try and speak it and it kind of forced me to give it a try even more when I was afraid because I had no other way to communicate, so I think being around others who speak and understand the language definitely makes it easier for you to understand it and learn it quicker.

What did you think about bilingual education in the United States?

'Bilingual education' is when students are taught in two languages in school.

When you 'fit in' somewhere, it means that you get along with the other people. You feel comfortable and as though you belong there.

I never wanted to lose that aspect of my life

I never wanted to lose that aspect of my life and a lot of kids had to do that because there are schools that don't have bilingual programs.

Do you think it has been easier learning French through a textbook or learning English being thrown into the United States and having to learn it?

'Being thrown in,' in this case, refers to the way in which people can be put in a situation that makes them learn something a lot faster than they would in the classroom. This is because they are fully immersed in the situation and have no choice but to learn.

I think learning a second language made it that much easier to jump into a third language.

When you 'jump into' something, it means that you start something for yourself, fully and with enthusiasm.This is different from being thrown in because you are making the decision to start the activity.

765 Planning a Birthday
Lupe talks about her birthday.
﻿
INT 5
Kara

763 The Future of TV
The latest in television technology.
﻿
INT 5
Mark

Complete the sentences with the words below.
bilingual • fit in • aspect
thrown • jump in