Shona talks about rock climbing, both indoors and out in nature. 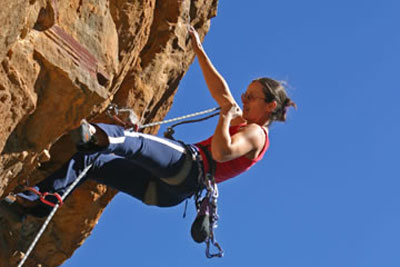 Todd: So, Shona, you are quite fit. You like to run. Do you like to do anything else?

Shona: Yeah, actually. I like quite a lot of different sports. I like to play tennis. That is like something that I like to participate in with someone else, but also I'm into more solitary sports, like I like doing yoga in the mornings. I like to do a bit of Yoga. I also like to use the gym and I also like to do climb, wall-climb, or sometimes I've odd **** climbing. It has to be with walls.

Todd: Cool, so actually let's talk about climbing. You climb at the gym?

Shona: No, my gym doesn't have a climbing wall, but there's somewhere in the city I'm from that has like a huge climbing center and you can go there and there's like all different types of walls, different abilities, and there's also a big rotating wall as well for when you are really good, and you can use that one and like climb up there.

Todd: Do you ever actually take this out and practice on real rocks?

Shona: Yeah, I have done. I have done in the past because an ex boyfriend was really into climbing so I went out with a few climbs with him, like as an introduction and that was pretty amazing. Like, it was completely different than climbing outdoors from it is from like inside. Like wall climbing is probably a bit easier than actually outside because, you noticed you've got more to sort of hold on to and stuff because it's built for climbing but the natural environment is harder to climb because like there's not as many crevices and stuff and you've got to spend longer to try and find them and they're not as obvious, but it's probably more enjoyable to do it outside than it is inside.

Todd: Right, so when you climb outside do you have a lot of fear that you're going to fall?

Shona: Not really. I guess it depends on who you are like climbing with. Like if you are with someone that you completely trust, then that's really important but I guess if you're with like a stranger you didn't know that well then you might be a little bit worried about like dropping or whatever, but I'd say I'm probably more fearful of dropping indoors because it's just myself than I would be outdoors cause I'd be with someone else.

Todd: Oh, wow, that's interesting. Actually, I heard that in rock climbing it's quite unique in that actually women are better... are naturally better rock climbers than men because because they have smaller fingers and they're lighter. Is that true?

Shona: I've heard that was well. Yeah. I've heard that like women are a bit better at rock climbing. I don't really know how true it is, cause like most of the really good climbers I've met are male, but yeah, I guess it's like naturally they're built more for climbing, like it is a bit easier just cause of like the woman's body in comparison to a man.

Todd: Right. Yeah, it seems to make perfect sense. And just lastly, when was the last time you went rock climbing?

Todd: So rock climbing is something you'd recommend for everybody?

Shona: Oh, yeah. Absolutely. I think it's like so challenging that you can get so much out of it because you progress. You get stronger so quickly. Like you really notice a change in your muscles and everything and it's like, it's just such a great feeling to reach the top. You know that's the most exciting part is when you like reach where you're trying to go and you just like, you feel like you've really accomplished something. I think it's really fun.

Todd: Well, you make it sound really fun. I wanna give it a try.

Shona: Yeah, you should do.

I'm into more solitary sports, I like doing yoga in the mornings.

When you are 'solitary,' it means that you are alone.

There's also a big rotating wall as well for when you are really good.

When something is 'rotating,' it means that it is spinning around and around.

The natural environment is harder to climb because there's not as many crevices.

'Crevices' are types of cracks that appear in a surface, in this case, on the surface of rocks.

You've got to spend longer to try and find them and they're not as obvious.

When something is 'not as obvious,' it means that it is not clear.

You might be a little bit worried about like dropping or whatever, but I'd say I'm probably more fearful of dropping indoors.

'Or whatever' generally refers to other things that you could be afraid of.

Complete the sentences with the words below.
solitary • rotating • crevices
obvious • whatever