Mike talks about his eye surgery and what happens to vision after an operation. 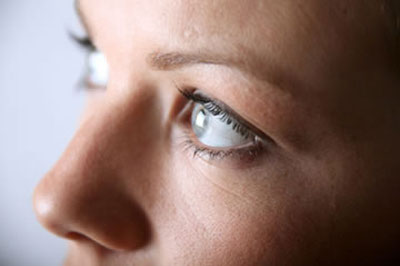 Todd: OK, Mike you mentioned that you had eye surgery, so when you had your eye surgery, could you see after your operation?

Mike: Well, that's.. no, I couldn't because I can't see anything out of my left eye, so when I had the operation on my right eye - once you have surgery inside your eye - now this is different surgery from the kind of surgery you get to clear your vision. These days everybody gets laser surgery to clear up their vision. It's completely different. It's operating inside the eye. After that, your eye gets filled with blood from the surgery. It bleeds inside your eye.

Mike: Yeah. Well, it's normal, so but because of the blood, you have inside your eye, there's something called vitreous fluid. It's the fluid that's in your eye, and that eye becomes so filled with blood. There's so much blood covering it. You can't see. Your eye is like being in a very thick fog patch. You just can't see anything. So I took about two months for that blood to clear out of the eye, and for two months basically I was almost completely blind.

Todd: So, when you mean blind, you said it was like fog so was it like a white blindness or a black blindness?

Todd: It was white?

Mike: And in fact, it's kind of weird. It's kind of weird to describe but when I saw... The first, I guess, the first two or three weeks, a couple of things happened. The first two or three weeks I couldn't see anything because the blood was completely inside the eye. Sometimes what happens though happens though is the blood, because you are sitting up, the blood drains down into the bottom of your eye and then you can see more and more gradually, but then at night you go to sleep and then you wake up the next day and the blood is all, makes stuff in your eye and then you are back to square one.

Mike: Yeah, so that was kind of harsh.

Todd: So, how did you get around? Who took care of you?

Mike: My mom. My mom and my brother actually. They came and they were helping me out a lot. I mean I have to thank them so much. I still do but, yeah they were golden. They were taking me everywhere and guiding me around and taking me to places and doing things and yeah, fantastic.

Todd: Well, you have a good family.

Mike: I have a great family.

This is different surgery from the kind of surgery you get to clear your vision.

'Clear your vision' means improve your eyesight so that you can see better.

These days everybody gets laser surgery to clear their vision.

'Laser surgery' is a type of medical procedure that is very accurate. The surgeons use lasers, instead of metal tools, to complete the surgery. Benefits to laser surgery are that it doesn't leave scars, and it is very precise.

Your eye is like being in a very thick fog patch.

A 'very thick fog patch' is a misty area in the eye that is hard to see through. Fog is like a cloud really close to the ground.

back to square one

You wake up the next day and the blood makes stuff in your eye and then you are back to square one.

'Back to square one' means that you have to go back to the beginning and start again.

My mom and my brother helped me out a lot and they were golden.

'They were golden' means that they were nice, good and extremely valuable people.

799 Studying
Tini shares how she likes to study.
﻿
INT 5
Tini

798 Teachers
Tini talks about the kinds of teachers she likes.
﻿
INT 5
Anita

Complete the sentences with the words below.
vision • surgery • fog patch
square • golden