Jeyong talks about travelling with a member of her family. 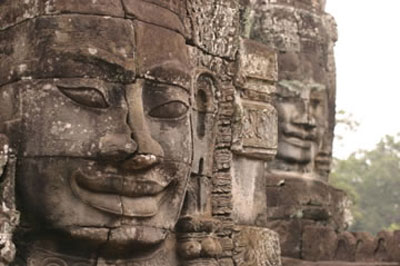 Todd: So, Jeyong, you were telling me that you like to travel.

Todd: Now, this is interesting. Who do you normally travel with?

Jeyong: You would be kind of surprised to hear this, but then, I normally travel with my dad.

Jeyong: That will be first of all because my dad goes on a business trip very often and I ask him if I can follow him most of the time and he would say yes, and I would just have time with him on his business trip and traveling around.

Todd: That's really cool. What kind of business does your father do?

Todd: So does he teach you the secrets about business?

Jeyong: Not that much about business, but then traveling around he teaches me about differences between all the cultures of countries.

Jeyong: How importat that is.

Todd: So what countries have you been to with your father?

Jeyong: A lot to name, actually. Do you want me to name all those?

Todd: Well, how about which ones do you remember the most?

Jeyong: I remember the most about Europe. I went to France, England, Switzerland and Roma so those four places were very interesting for me, and other than that, I went to Cambodia, Vietnam, Guam, and so on.

Jeyong: Cambodia is a really memorable trip for me with my dad because it was really interesting how many people in boats on the water. There's a society in Cambodia like that and then it was really sad looking at them how they own much money and they have to spend their day using a dollar.

Todd: So not very much, but did the people seem happy in Cambodia?

Jeyong: They did look happy, happier than the people where I come from.

Todd: That's kind of interesting. Yeah, I used to live in Thailand and I kind of felt the same way to, although Thailand is very developed. Any other places that you've been to?

Jeyong: Other places? Maybe in The States.

Jeyong: When I was in elementary school, I lived in Ann Arbor, Michigan, for five years but after that I also went travelling around the other states, such as San Francisco in California, Los Angeles and New York City, where I like the most and Florida. All the beaches.

Todd: Now, I'm from San Francisco and you said you like New York better that San Francisco, so I have to ask why.

Jeyong: Why? Because the people in New York, how they live their life, it looks cool.

Jeyong: No problem. Thank you.

First of all because my dad goes on a business trip very often and I ask him if I can follow him.

'First of all' means the number first thing to consider or 'in the first place.'

He's in the apparel business.

Cambodia is a really memorable trip for me.

In this instance, 'developed' refers to how a country is commercialized, modernized, and is geared towards the tourist industry.

When I was in elementary school, I lived in Ann Arbor, Michigan, for five years.

'Elementary school' is the school for the youngest school-age children in the American education system. Children go there from 6 to 11 years old.

784 The Musuem
Shona shares what she thinks about museums.
﻿
INT 6
Greg

782 Traveling with Family
Jeyong talks about travelling with a member of her family.
﻿
INT 6
Mike

781 Being Blind
Mike talks about his life after eye surgery.

Complete the sentences with the words below.
first • apparel • memorable
developed • elementary