Greg talks about living in the United Arab Emirates and its two main cities. 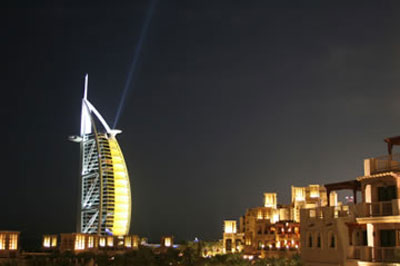 Todd: So, Greg you taught in the Middle East.

Greg: Yeah, I lived in the United Arab Emirates for awhile.

Todd: Wow, that's a lot different than most places.

Greg: Ah, it's very different. I'm glad I went to experience another culture, another way of life.

Todd: Yeah, what do you remember about it?

Greg: Well, one thing that's so unique about the United Arab Emirates is that actually there are people from all over the world there.

Greg: And the rest are foreigners who have come in to work in various ways.

Todd: Where do these foreigners come from?

Greg: Actually, I never spent that much time in Dubai because I lived in Abu Dhab. I just went to the airport in Dubai. Abu Dhabi though, I tell you, it's really amazing. The architecture is really beautiful. The Arabic architecture is just amazing. The mosques. The marble on the building, really, beautiful.

Greg: I lived in an apartment on the 14th floor.

Greg: The 14th floor. Oh, it's, Abu Dhabi is amazing. You know, maybe 50 years ago, there were just some small villages, but after oil was discovered, and the country became rich, there was like an explosion in the population and new buildings were going up every day. They're growing like mushrooms. I could see the ocean, though from my apartment. I remember how beautiful the ocean was.

Todd: What's the local food? Is it rice-based?

Greg: Oh, they eat rice, and a lot of, camel meat, camel meat is unusual and the cheeses are really salty.

Greg: And a lot of Mediterranean foods too. Dates, the dates were fantastic.

Greg: I never liked dates before I went there, and the olives. The olives are also wonderful. Out of this world.

Todd: You're making me hungry.

The 'native population' refers to the indigenous or original people from a certain country who were there before colonialists came.

People from all over the world, and actually it's very cosmopolitan.

When an area is considered to be 'cosmopolitan,' it has people from all parts of the world living in it. It is very diverse.

explosion in the population

There was an explosion in the population and new buildings were going up every day.

When there is an 'explosion in the population' it means that there is a rapid increase in the number of people living in a certain area.

What's the local food? Is it rice based?

When cuisine is 'rice-based,' it means that rice forms the basis of most of the meals.

out of this world

The olives are also wonderful. Out of this world.

When something is described as 'out of the this world,' it means that it is wonderful.

Complete the sentences with the words below.
native • cosmopolitan • explosion
rice-based • world