Mike talks about diabetes, what it is, how he got it, and how he deals with it. 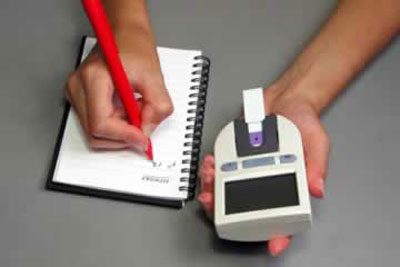 Todd: Now, Mike, you are diabetic.

Todd: OK, so that means you have diabetes.

Todd: Can you explain what diabetes is?

Mike: OK, basically, your body... everybody has an organ in their body called a pancreas. Your pancreas produces a hormone called insulin and insulin coverts your body - the sugar you take into your body - it converts it into energy. Now all food you eat, all sugar.... all drinks you drink, they all are basically sugar. They have sugar in them, and they come into your body, it's digested and it changes into plain sugar. The insulin changes that sugar into energy, and then for diabetics their pancreas stops making insulin, so you body just collects all this sugar and it can't get rid of it, but it has no energy, like no fat, so diabetics would typically start to lose weight, and they're peeing... going to the bathroom all the time, and the reason is cause the excess sugar that's building up in their body.

Todd: Now this is something you've had since you were a child?

Mike: That's right. I've had it for over 25 years. I got it when I was about twelve years old.

Todd: Wait a minute! So you're not born with it? It just suddenly one day, you became diabetic.

Mike: That's right. Yeah. It's... They're not sure why. They still don't know but it's probably partly genetic, so I think if you have it in your family there's a chance you can have it yourself and these days, people are, you know, getting it more and more.

Todd: Right, so how is your life different, that being a diabetic?

Todd: So, that's the main thing you have to do?

Todd: And how do you check that?

Mike: Well, I have a.... it's called a glucometer, and you prick your finger with a little needle and the blood comes out, you put it on a little strip, and the strip goes in the glucometer and it gives you a reading of your blood-sugar level.

Todd: But basically you still have a normal life. You know, your life isn't different compared to normal people - other people's.

Mike: Of course. Yeah, things are pretty much normal, except for me in general, but my lifestyle and everything else is the same.

If you are a 'diabetic,' you have a medical condition where your body does not produce its own insulin. Insulin is a hormone that helps your body metabolize glucose and other nutrients.

it converts it into energy

The sugar you take into your body - it converts it into energy.

It 'converts it into energy' refers to the way in which the body will change the sugars that it gets through foods and use them to power the body's major functions.

it can't get rid of it

Your body just collects all this sugar and it can't get rid of it.

'It can't get rid of it' refers to the way in which the body cannot dispose of the all the sugar.

they're not sure why

They're not sure why you get diabetes.

'They're not sure why' means that people are not certain about the reason for something.

It's probably partly genetic, so I think if you have it in your family there's a chance you can have it yourself.

When something is 'partly genetic,' it means that it could be partly hereditary or your parents may have given you the disease.

Complete the sentences with the words below.
diabetic • convert • get rid
not sure • genetic