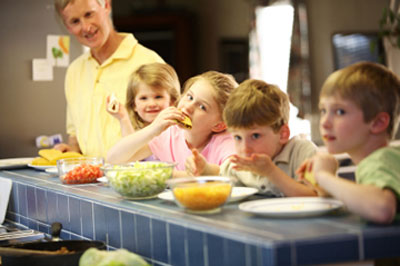 Todd: Now Mike, we've been talking about diabetes, and recently in the United States they've wanted to put warning labels on things like soda and fast food, and things like that, warning about the possibility of getting something like diabetes. Do you agree with that?

Mike: Yes, I do. I think though they really should try to... and we talked about this before, but... they really should try to get, especially young people, children to have a healthier diet and a healthier way of being. Now, it's difficult when you're young and you see your parents and they're 400 pounds each, and you know, they're trying to tell the kids to eat healthier, be healthy. I think it adds into it, but I think it needs to start with... putting labels on things? I frankly, I don't know if that's gonna do much to change. It works maybe with cigarettes but there's other reasons why people stop smoking.

Todd: Right. Well, I mean, nowadays a lot of times they want soda vending machines out of schools because they say that it creates bad habits. The schools can't get money without... well, they can get money, but it's easy for them to get money from the vending machines. How do you feel about that?

Mike: Well, I mean, they can, I think they should compromise. Putting vending machines in, but put healthy drinks in the vending machines. Put diet drinks instead of, you know, sugar drinks. Yeah, it's great having a brand-name soft drink machine that has it's number one selling soda, but to compromise so the children don't have peer pressure to buy those, put diet drinks, put fruit drinks, you know....

Mike: Mineral waters and things, sure.

Todd: Right. It's true. OK. So what about fast food? Do you think fast food should have warning labels or maybe signs?

Mike: Yeah, again, I mean, you know, it's been a big debate now for the last few years about blaming the fast food industry for everything. Yeah, I agree, fast food is not good. Generally, I never go to... I almost never eat fast food, but I think it's a... you know, everybody's responsible. They have a conscious choice of wanting to eat fast food or not.

Todd: Right, and it tastes so good.

Todd: It smells so good. It tastes so good.

Todd: And it's cheap.

Mike: It is. It is. There's several factors why I think it's so.... it leads to these kinds of problems, like diabetes, but and it does. I'm not saying it doesn't, but I think it's a conscious choice. I think people just need to be, you know, educated better and there's a whole bunch of issues but I think it's peoples themselves that need to realize that they have to balance their lives.

Todd: Right, I mean, actually, I think you know the government is taking the wrong approach, you know, rather than put warning labels on fast food, why doesn't the government spend more money teaching people how to cook. If both parents are working that means kids can't cook, or they can't learn from the parents how to cook so if kids learn how to cook, they would probably eat healthier diets.

Mike: Sure. Absolutely. Absolutely. Yeah, there's a whole... like I said, there's many issues surrounding it but, yeah, I mean, just by putting labels, I think it's not going to solve any problems, really.

It's difficult when you're young, and you see your parents, and they're 400 pounds each.

'They're 400 pounds each' refers to the body weight of each parent. The mother weights 400 pounds, and the father weighs 400 pounds.

It's great having a brand-name soft drink machine that has its number one selling soda, but to compromise so the children don't have peer pressure to buy those.

'Peer pressure' refers to social pressure from people your age that makes you feel as though you should be doing something that you do not necessarily want to do.

They have a conscious choice of wanting to eat fast food or not.

'A conscious choice' is a decision that you make after having giving it some careful thought.

a whole bunch of issues

There's a whole bunch of issues, but I think it's people themselves that need to realize that they have to balance their lives.

'A whole bunch of issues' means that there are multiple problems that you could encounter.

I think you know the government is taking the wrong approach.

When you have the 'wrong approach' to something, it means that you try to do something in the wrong way.

799 Studying
Tini shares how she likes to study.
﻿
INT 5
Tini

798 Teachers
Tini talks about the kinds of teachers she likes.
﻿
INT 5
Anita

Complete the sentences with the words below.
pounds • pressure • conscious
issues • approach