Santi discusses some of the sports that she likes to partake in. 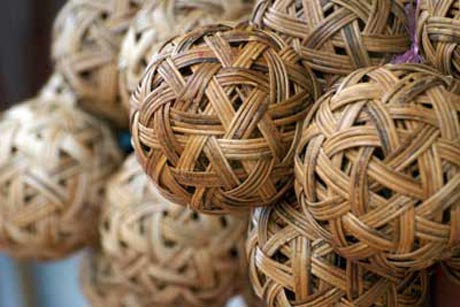 Todd: Well, actually speaking of sports, actually when I was inThailand they played a sport I think you have in Indonesia called takaw - sepak tekaw - I think.

Todd: Have you ever seen that?

Santi: I tried it once in university and it's quite great I think.

Todd: Yeah, actually, you know, recently I was watching the Olympics and I was thinking that should be an Olympic sport. I mean, I didn't see it in the Olympics. Maybe it is, but ... because people from South East Asia are so good at it and you need to have like that type of body ... very, you know, kind of light, and lean and very flexible. But for people that aren't familiar with the game, can you explain what it is?

Santi: The ball is made from rattan and then you have to be kind of like athletic and have special talents to catch the ball with every part of your body and then you have to have self-conscious of where the balls gonna go because once like it goes fast and just times oh my god go directly into you so have to catch the ball maybe with your head or maybe with your hands or even with your chest.

Santi: I want to do it but actually the equipment is pretty expensive and I don't know much about it.

Todd: Now in your country, in Indonesia, are they many golf courses?

Santi: Yes, they have. We have an international tournament actually in Bali. It's very good place to play golf.

Todd: So you can surf in the day, or in the morning,

Santi: and at night you have ... kind of like relax and enjoy a message and spa.

Todd: Wow. Sounds good. OK, well, anyway it was nice talking to you about sports, Santi.

Santi: Thank you, too.

Their bodies are light and lean.

They have a flexible body.

Flexible people are able to bend their bodies easily.

People aren't familiar with the game.

To be familiar with something means to know or understand it.  Note the following:

You have to be self-conscious of where the ball's gonna' go.

Here, self-conscious means to notice or be aware of things around you.  We usually speak only the word 'conscious'.  Note the following:

We use the word 'ultimate' to talk about the best or the worst of something or someone.  Note the following:

Complete the sentences with the words below.
lean • flexible • familiar with
self-conscious • ultimate