Aimee talks about working part-time at an interesting job when she was at university.

Paul: So Amy, I was talking to somebody the other day and they told me that you had quite a number of like interesting little odd jobs. So I'm interested, so could you tell me a bit about that.

Amy: I don't know how odd they were. I don't know. When I was in university, part time jobs, I used to work in restaurants and—the usual stuff—restaurants, and I think my favorite was working in a nightclub. It was a really, really big nightclub and I used to work on the floor, just kind of cleaning up, looking after all the drunk patrons. 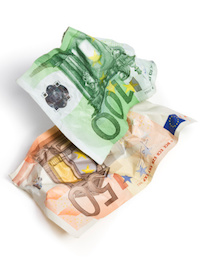 And my first night there was—actually, one of my favorite DJs was on, so that was great. I got to listen to really good music whilst finding money on the floor, and cleaning up after folks. It was really good.

Paul: You found some money on the floor.

Amy: Yeah. You know, it was a busy club. Really, really full, a good couple of thousand people in there. And I guess people were doing whatever they were doing and they would drop big wads of cash. And because I was the person to clean up all the glass bottles, then I would find the wads of cash on the floor. So it was good. I’d get my wages, I’d get tips, and then I would get my own personal tips from finding money on the floor.

Paul: So you must have found like a whole range of different things, like, what else did you find?

Amy: Yeah. A little wraps of things, and then packets of things, yeah. I mean, I had to work hard for the money. It wasn’t easy because the place was full, absolutely rammed of people. Everybody is incredibly drunk or whatever and they all just want to dance and have a good time. And I have to make sure there’s no broken glass for safety reasons, obviously. So I’m pushing my way through the crowd and keeping eyes on the floor constantly with a torch. And alongside the broken glass that I would sweep up would be, yeah, wads of cash, sometimes little purses, little bags, things like that.

When I find, like, identification for things—when it was a purse, I would do the right thing with it, hand it in but it was just a wad up, like a rolled up set of notes, I would just put them in my pocket for me, basically.

Paul: Yeah, it’s difficult to know what to do with cash because you’re handing it to someone who—well, it’s cash, isn’t it?

Amy: I remember finding some driving license and student ID, and I took—it was actually the same university that I went to at the time, and I just took it to uni when I was going during the week. And I handed it in to make sure that it got back to the owner because you know that’s the worst thing about when you lose your purse or your wallet. The cash, you can kind of just say goodbye to. It’s a given really that it’s going to be gone, but it’s your ID and your cards and everything. It’s such a hassle trying to get them back again. So I wanted to make sure that whoever drunken idiot dropped them in that club that it got back to their hands safely.

Paul: Well, that’s nice. So you’re a thief with heart then.

Amy: I’m not a thief. I’m an opportunist.

Paul: I’m pulling your leg, Amy. No, I would have done the same.

You had quite a number of little odd jobs.

An odd job is an unusual job that a person usually does for a short time. Notice the following:

I looked after all the drunk patrons

A patron is a customer. Notice the following:

They would drop big wads of cash.

A wad of cash is a stack or roll of money. Notice the following:

The place was full, absolutely rammed of people.

It’s such a hassle trying to get them back again.

A hassle is something that is inconvenient but necessary. Notice the following:

When you pulls someones leg, you are joking and not serious. Notice the following:

#1349 In the Tropics
Paul talks about a job in the rainforest.
BEG 3
Gisela

#1348 Single's Day
Why we celebrate some holidays?
INT 4
Abidemi Rory

#1346 City Down Under
Shirley talks about Melbourne.