Phil talks about a beautiful place he visited while he was in China. 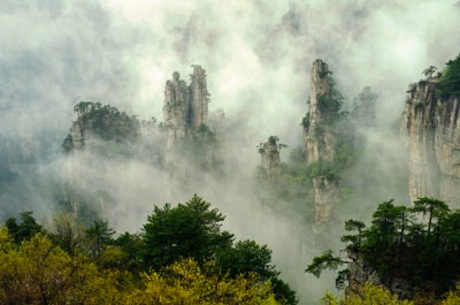 Todd: So, Phil, I'm thinking about going to China and I'm really into nature. I love wildlife. Can you recommend anything to me?

Phil: The best thing I did in China was go through Zhang Jia Jie National Park. That's Hunan Province, and if you like nature, that's really highly recommended. It's an UNESCO cite. It's easy to find on the internet, but it's just craters, gorges, trees sticking out of really strangely shaped hills, lots of caverns and very very few people there. It was empty when I was there. I had never heard of it before. I had just been recommended by a tour guide. It was spectacular. If you like nature and like hiking it will definitely give you a workout and you'll take a lot of pictures.

Todd: Wow, well, how big is this park?

Phil: Good question. I didn't see the whole thing, and I spend three days there walking different parts every day, so I really don't know the size of it except that it's massive. So you just went hiking and then you camped overnight, or did you just hiked for the day?

Phil: Just day hikes, the tour I had been organized with had rented us a hotel, just stayed in the hotel, slept there at night, and walked most of the day.

Todd: Uh-huh. Did you see any wildlife?

Phil: Some insects and some butterflies, but no, nothing, no mammals, nothing like that.

Todd: Was the, were the trails steep?

Phil: Yeah, but most of them do have stairs so, regardless of your fitness level I don't think it would be very difficult for anybody to, some people might be a bit slower than others but you should be able to make it up alright.

Todd: So, where is this again? You said in Hunan Province!

If a place is 'spectacular' it is amazing or incredible.  Notice the following:

Hiking will definitely give you a workout


If an activity gives you a 'workout' then it gives you exercise.  Notice the following:

Did you see any wildlife?

'Wildlife' are animals that live in their natural environment, or not in a zoo.  Notice the following:

I saw insects and butterflies but no mammals.

A 'mammal' is an animal that is covered in hair and usually feeds its babies milk.  Notice the following:

Were the trails steep?

If a trail is "steep" it is very inclined, like walking up a big hill.  Notice the following:

145 Indonesia
Phil talks about a Volcano he climbed when he was in Indonesia.
﻿
BEG 3
Trevor

143 Night Life
Trevor talks about his routine during a typical evening.
﻿
INT 4
Phil

142 Beautiful China
Phil talks about a beautiful place he visited while he was in China.
﻿
INT 4
Roe

141 Wind Surfing
Roe talks a little about his sport of windsurfing.