Adrienne and Mike talk about trick-or-treating on Halloween 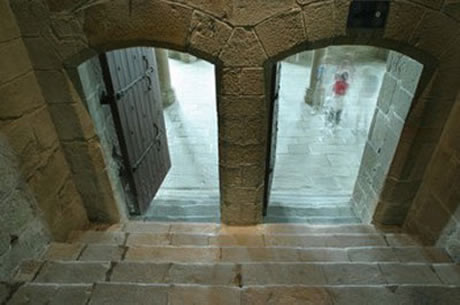 One of my favorite things to do when I was a little girl was to stay with my granddad, so I'd go to stay with him on the holidays, and he would often tell me stories, or sing songs for me, so I learned a lot from him, but one of my favorite things, like I said was to listen to his stories and around Halloween sometimes, or if we asked him at other times when it was getting dark or a bit scary we'd ask him to tell us a ghost story, so one of, yeah, one of the first ghost stories I remember was him telling us about a time when he was quite young, I think he was in his early twenties maybe, and he was already married but he went back to his parents house one night to just, to meet his family and friends, have a game of cards maybe with friends who were gathered there, so it got pretty late because they had been playing cards for a long time having some fun so he didn't want to leave and then eventually, he and his friends decided, OK, we'd better leave and better go back home, so the two of them were walking together towards their house but in between his parents house and his new home they had to pass a graveyard, so these two guys, young men, I suppose, they weren't very happy with the idea of going past a graveyard very late at night, because you know, they're lots of stories about ghosts and spirits hanging around at that time of night, so they were approaching the graveyard and they were a bit scared and they were wondering whether they should turn back or keep going. Be strong and brave about it. So they were approaching the graveyard and suddenly my granddad saw what he thought was a priest sitting on the wall. So he say a man dressed in black, with a white collar, and he was so frightened, I mean, I can't imagine what he must have said at the time, but he and his friend were really, really scared, and they were talking between themselves, "Oh, my God! What should we do? What should we do?" but they were so frightened they couldn't move. So eventually, my granddad decided, OK, I'm just going to run for it. I'm going to make a run for it. So all of a sudden, he decided and he just ran straight past the graveyard, and then suddenly, this big dog came jumping down from the wall of the graveyard, and my granddad was so scared, he was like screaming, and everything, but as it turned out it was just a sheep dog that he'd seen so in the dark of night, in those days of no road lights and street lights or anything what he'd actually seen with his friend was a black sheep dog with a white collar, so not a ghost after all.

My granddad would tell me stories.

To 'tell someone a story' is to verbally describe something that happened.  Sometimes these stories are true or sometimes they are invented.  Notice the following:

They had to pass a graveyard.

'Graveyard' is another word for 'cemetery.'  It is a place where people bury their dead.  Notice the following:

They were so frightened they couldn't move.

If you 'can't move' you stay in one position, in this case because you are so afraid that you are frozen.  Notice the following:

make a run for it

I'm going to make a run for it.

To 'make a run for it' is to try to escape from something quickly.  Notice the following:

A black sheep dog with a white collar.

A 'collar' is like a necklace for a dog.  It goes around the dog's neck so you can tie the animal up or take it for walk.  Collars also usually have the phone number of the owner.  Notice the following:

tell stories • graveyard • can't move
a run for it • collars