Marion talks about special memories she has of her grandfather. 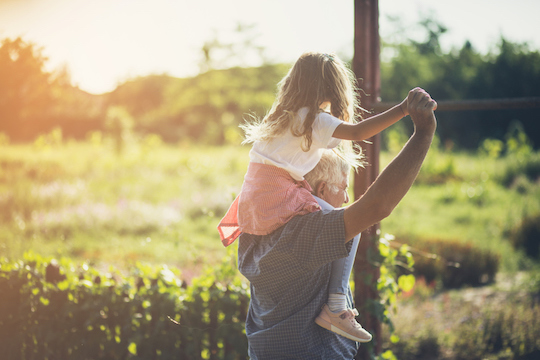 One of my earliest memories involves my granddad and his garden. He had a huge garden when I was growing up. It was, I mean, it was more of a field than a garden really it was so big. He had lots of fruit trees, like fruit bushes, like elder berries, black berries, raspberries. He had strawberries as well, gooseberries, so every berry you could think of. He also had, let me see, apple trees and cooking apple trees, and he had lots of vegetables too as well like rhubarb, onions and lettuce, anything you could think of.

When I was a little girl I didn't really like vegetables all that much to be honest, but I did love helping him pick his strawberries when they came in the summer. Strawberries always taste better when they are warm and from the sun, and you can pick them and put them straight in your mouth, beautiful. One of my funniest memories, though, well when I look back on it now, it's funny, is of helping my granddad when he was planting his onions one year, so I was staying with him for awhile and he said, "OK Marion today we're going to go and we're going to plant some onions," in the spring.

So I went out and I was only I think about 5 years old, but I wanted to help so both of us went out and we planted two rows of onions, so he planted one row and I planted the other, or he really planted most of them I think. But I tried to help anyway, even though I was quite small, so then we did our job that day and I didn't really think anymore of it, until the onions started to grow and then suddenly they were ready to be harvested, or whatever, to be picked from the ground, and you could see that the stalks were growing nice and tall. We were out in the garden one day, my granddad and I again so it must have been a good few months later, further towards autumn, and my granddad came over and showed me the onion stalks and he said, "Look Marion! The ones you planted are way bigger than the ones that I planted."

And I was so happy with myself. So happy that the job that I had done was better than even my granddad, who was a great gardener and now when I look back I realize, you know that wasn't really the case. That he was just saying it to make me feel better, and to make me proud of the work I'd done with him, but at the time it really worked. I was really, really so proud to have helped my granddad, the gardener, and to have done a better job than he did. I still wouldn't eat the onions though.

I didn't really like vegetables all that much to be honest.

The phrase 'to be honest' is a common phrase for when peoples say something negative about something.

I did love helping him pick his strawberries when they came in the summer.

Here, 'to come in' means to appear, grow or come to full bloom.

When I look back on it now, it's funny.

Here, 'to look back on' means to remember something. Notice the following:

We planted two rows of onions.

Here, 'plant' is a verb. It means to put seeds or plants in the ground so they can grow. A row is a line of plants or seeds in a garden or farm. Notice the following:

But at the time it really worked.

Here, the phrase at the time means then. Notice the following:

honest • come • look back
plant • at the time