Alex answers questions about his job as a college DJ. 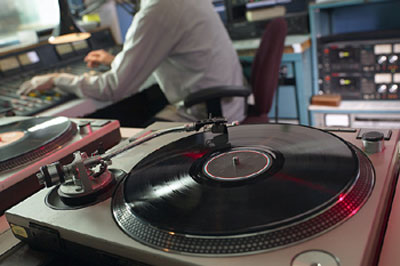 Todd: Alex, can you talk a little about working at a radio station?

Alex: Yeah, sure. The Radio station at my school is called WMKP. I'm actually a DJ. Well, not the turn table DJ per se, but a DJ that just plays music and talks on the air a lot, so I do that a lot and that's really fun because I can have guests over and I can play, I like all kinds of music, and where I am only people listen to certain types, so I like to sort of open their ears to many different kinds of music from, I don't know, electronic, to classical, to jazz, to whatever I feel like playing.

I work at our school's radio station.

A 'radio station' is an organization that broadcasts or presents musics and discussions on the radio. Notice the following:

I'm not the turntable DJ, but I play the music.

A 'turntable' is a disk that spins and rotates records or discs. Notice the following:

I'm not the turntable DJ per se.

In this example 'per se' is very similar to exactly. Notice the following:

I just play music and talk on the air a lot.

When a radio station is 'on the air' they are recording live.  Notice the following:

I like to open people's ears to different kinds of music.

radio station • turntable • per se
on the air • open her ears

231 Music
Kate talks about what kinds of music she likes to listen to.
﻿
INT 4
John

230 The Gift
John talks about a Valentine's gift he received from his wife.
﻿
INT 4
Alex

229 The DJ
Alex answers questions about his job as a college DJ.
﻿
INT 4
Kate

227 The Horse Ride
Ashley talks about an interesting journey she took on a horse.
﻿
BEG 3
Kate

226 The Gym
Kate talks about getting in shape.