John talks about a Valentine's gift he received from his wife. 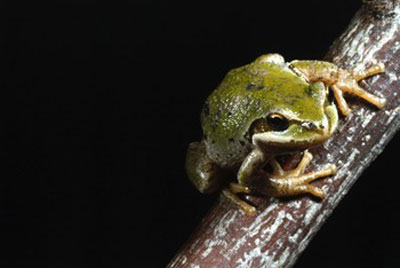 Todd: John, can you talk a little bit about the frog that you got for your Valentine's day gift.

John: Sure, yeah, my wife gave me this Pac Man frog for Valentine's day, and basically it was this enormous, stinky frog that would only eat baby mice, so you had to like feed it like a little tiny cute baby mouse like every week and then it would just like leave this big mess, this stinky mess, and you'd have to clean it up and at the time I had just gotten rid of an iguana, and like I didn't want any pets and that was the gift my wife gave me so!

John: I think I kept it for about six month. Maybe even a year.

Todd: Oh, so you took it back to the pet store. They took it.

John: Yeah, they took it. I looked around for someone to like give it to, and everyone was like, "No, that thing is disgusting. No one wanted it and I asked the pet store would they like pay for it, and they were like "No, no, you bought it" so I was just like, "Here, OK, have it back" and they were "Fine, we'll sell it again"

Todd: OK, do you ever know what happened to the frog?

John: No, maybe, I went back to that pet store like a year after I gave it back to them and it was still there and it was like twice the size, so I don't know if they ever got rid of it or not.

My wife gave me this enormous, stinky frog for a gift.

If something is 'enormous' it is really, really big. When something smells bad we can say that it is 'stinky.' Notice the following:

stinky mess or clean up

It would always leave this stinky mess that I'd have to clean up.

A 'mess' is something that is not clean or orderly, in the case of the example, a mess that smells bad. To 'clean something up' is to remove the mess.  Notice the following:

I had just gotten rid of an iguana.

You 'get rid of' things that you don't want or need anymore.  This can either be throwing them in the garbage, giving them to another person or selling them. Notice the following:

No one wanted to have it, because people thought it was disgusting.

When something is 'disgusting' it is not nice and maybe makes you feel little sick. Notice the following:

I saw the frog a year later, and it was twice the size.

If the frog is 'twice the size' that it was before it means it has grown to double the original size, or it is two times as big. Notice the following:

231 Music
Kate talks about what kinds of music she likes to listen to.
﻿
INT 4
John

230 The Gift
John talks about a Valentine's gift he received from his wife.
﻿
INT 4
Alex

229 The DJ
Alex answers questions about his job as a college DJ.
﻿
INT 4
Kate

227 The Horse Ride
Ashley talks about an interesting journey she took on a horse.
﻿
BEG 3
Kate

226 The Gym
Kate talks about getting in shape.