Ruth and Todd talk about their morning. 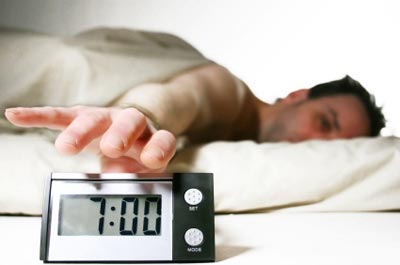 Todd: So, what did you do today?

Ruth: Well, actually, I got up this morning quite early. I couldn't sleep so I was a little bit annoyed and then I went to church and I had some lunch and..

Todd: OK, but, you said early, like how early?

Ruth: That is early if you went to bed at 1.

Todd: That's true. That's sleeping in for me.

Ruth: That's sleeping in. That's true. You're an early bird aren't you?

Todd: Now, last night we went out and had the beers.

Todd: I was actually quite happy this morning. I had no hangover.

Ruth: Did you not? (No) I felt a little bit queasy this morning, and I was a bit ashamed, and I didn't even drink very much. I wasn't, I didn't feel queasy. I think is was more that I hadn't had any sleep actually.

Todd: Yeah, did you feel guilty in church knowing that you still had the beer buzz?

Ruth: No. I didn't feel guilty about that.

Ruth: You must be a lunatic.

Todd: Well, I mean when the light comes up and the light goes through your window, I don't know how people can still sleep. You know? You can sleep when the light, the sunrise still comes up?

Todd: The apartment I was at before, it was crazy because there was a rooster outside, and it didn't do what it was supposed to do, like normally when the sun comes up, the rooster is supposed to go, "er-er-er-er" or whatever,
but this thing did it at like 1 and 2 in the morning. It used to drive me nuts, so I used to always wake up at 2 because I'd hear this rooster going "er-er-er" and I just wanted to kill that bird.

Ruth: Did you go sleep, back to sleep after that?

Todd: Yeah, of course I went back to sleep, but the bird would wake me up regularly. Yeah. No roosters here.

Ruth: That's not funny is it?

I couldn't sleep so I was a little annoyed.


When you are 'annoyed' about something, you are either frustrated or irritated.  Notice the following:

Getting up at 7 o'clock is not early; it's sleeping in for me.


If you 'sleep in,' you are sleeping later than you usually do. Notice the following:

You're an early bird, aren't you?


An 'early bird' is someone who naturally wakes up early.  Notice the following:

I was actually quite happy this morning because I had no hangover from last night.


You get a 'hangover' from drinking alcohol. It is when you head hurts the next day because you drank too much.  Notice the following:

I felt a little bit queasy this morning, and I didn't even drink very much.

Did you feel guilty in church knowing that you still had the beer buzz?


You have a 'buzz' when you feel the effects of alcohol, in this case beer, in your body.  You are not drunk, but you can feel some changes.  Notice the following:


A 'lunatic' is a person who is crazy. Notice the following: