Ruth talk about her favorite actor. 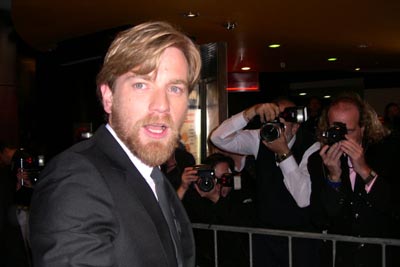 Todd: So, Ruth, who is your favorite actor or actress?

Ruth: Oh, that's a good question. I think it definitely has to be Ewan McGregor.

Ruth: Well, he's really, really good-looking. I think primarily I like him because he is so good-looking and he's just got really nice skin and really nice eyes and nice hair and so primarily I think it's his looks, although from what I've read in magazines and things, he seems like he is a nice guy as well.

Todd: What movie did you really enjoy that he made?

Todd: Did you see him in Train Spotting?

Todd: That's the first time I saw him and I thought that that was just a really good movie.

Ruth: It's a really good film.

Todd: You know when they showed that in the States a lot of people requested that it had like transcripts.

Todd: Yeah, because the English was so difficult for American people to understand.

Todd: Yeah, so, it's funny though cause now Ewan McGregor is Obi-One.

Todd: In the Star Wars movies.

Ruth: No, I'm not a Star Wars fan, actually but I would probably watch it just for Ewan McGregor.

Todd: Have you seen him in the other two?

Ruth: I just saw him in the first one.

I think primarily I like him because he is so good-looking.


'Primarily' can be replaced with 'mainly.' It is used to show the most important reason for something.  Notice the following:

He's got nice skin, nice eyes, nice hair, and so, primarily, I think it's his looks.


You 'looks' are your physical appearance or how attractive you are. Notice the following:

from what I've read in magazines

From what I've read in magazines and things, he seems like he is a nice guy as well.


You can use this phrase to talk about information that you have learned from reading a magazine.  Notice the following:

Ewan McGregor seems like he's a nice guy as well.


A 'nice' guy is a good person.  Notice the following:

Imagine him singing that song to you, that would just be absolutely phenomenal.


Something that is 'absolutely phenomenal,' is amazing. Notice the following:

When they showed that movie in the States, a lot of people requested that it had like transcripts.


A 'transcript' is a written version of spoken language. When you read what is being said on elllo, you are reading a transcript.Notice the following: